China, Rights, Silence and a Challenge 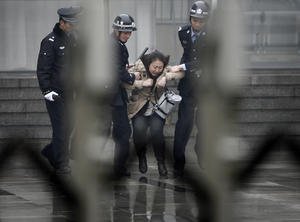 I am here to make a challenge.

I was recently reading a report from Human Rights Watch on the Chinese government’s failure to deliver on its National Human Rights Action Plan (NHRAP). The NHRAP is a broad document drawn up in 2009 to address the most basic of human and social rights questions within China today. It creates targets for the expansion of rights to basic standards of living, assembly, information, speech and the rights of ethnic groups. On it’s own, it is a laudable document.

The cynic in me believes that the document is nothing but a smoke screen designed to deflect criticism of what is, from my perspective, a brutal and authoritarian one-party government representing the interests of only the most wealthy members of a single ethnic group.

According to HRW, little progress has been made in terms of information, speech and political rights, and according to monitors, the situation has only gotten worse. The report contains a litany of abuses which have increased from 2009-2010, not the least of which include torture, illegal detention, broad use of the death penalty, heavier restrictions on the dissemination of information and internet freedom, arrests and disappearances of political dissidents and tighter controls on Uighurs and Tibetan groups.

All of this should be of no surprise to anyone. However, I am often curious as to what the average Chinese citizen feels about the broad abuses and totalitarian nature of it’s government. Here at the University of Michigan, science departments are filled with students from China. In some departments, the number of Chinese graduate students dwarfs that of domestic students. Yet, only once have I ever heard a Chinese student express anything remotely political, and that was to slam Japan’s incredible abuses during World War II. Outside of that, the only things I have seen were demonstrations against free-Tibet protesters during the Beijing Olympics.

In short, the silence is deafening.

I am very familiar with (and disgusted by) the incredible abuses of the United States government and US based businesses. We tend to wage the most egregious abuses against people who don’t have the right to vote or who live outside the US. Historically, we have committed genocide, silenced dissidents by putting bullets through their heads and are noted for vast abuses against ethnic minorities, not the least of which includes the slave trade.

There, I got that out of the way. A criticism of China is not to assume superiority of the United States or Europe. In fact, it is because some people in the West are so familiar with the fruits of genocide, racism and business/governments out of control that we criticize China. Plus, they make stuff cheaply for us, using the poorly paid, desperately poor people from the countryside, racking the conscience of some.

Please perhaps explain to me what exactly the Chinese government is so afraid of that it needs to jail and torture all persons critical of its policies. Is the Republic truly that weak?

I do not seek to humiliate, I seek to understand. I would very much like to know if there are people out there who may be as outraged as I am.

My email address is pslarson2@gmail.com.