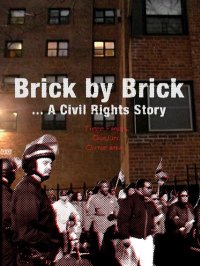 Ideally, I would have had this ready for last week MLK day, but alas, the DVD pile gets no smaller and other things get in the way. 2007’s “Brick by Brick: A Civil Rights Story” documents the problems of racial segregation in Yonkers, NY, a small working class community north of the Bronx.

Initially a predominantly Italian community, the State of New York required that Yonker’s build low income housing, which they managed to concentrate in a small corner of Yonkers. As New Yorkers began to move to the area, real estate agents and town officials conspired to segregate persons of color to the east side school district. Eventually, white residents, worrying that black home owners would spill over into the predominately white west side, purchased a ten foot strip of land separating the two districts and build a mile lone wall, blocking streets and restricting movement.

The school district intentionally steered black students into vocational school post-high school, disproportionately concentrated resources in the white schools, and, along with the white city council, maintained a seperate but absolutely unequal school and city policy for more than 20 years post Civil Rights. African-American residents, concerned with growing crime and poor schools brought the case to the federal courts leading to a landmark decision requiring that Yonkers cease discriminatory practices and build low income housing in the West Side.

White residents naturally protested, stymieing efforts to build the proposed housing, which would be small town houses situated in blocks of 10 to 20 in predominantly white neighborhoods. Eventually armies of aging white residents reminiscent of angry Tea Partiers descended on the city council and the mayor, leading to stand off between Yonkers and the State and Federal courts.

Brick by Brick is a record of deep seated racism and bigotry that exists all over the industrialized North East. Yonkers is not unique. Practially all New England cities practice an insidious form of segregation enabled by urban planners and business developers. However, in the case of Yonkers, an empowered black community succeeded with the support of wealthy and educated New York African American transplants and the power of the media. “Brick by Brick” is an American story, it’s background and roots inherent in an American society of exclusion and racial discord.