African Conflict and the Murdock Map of Ethnic Boundaries

I would like to turn something like this into a publishable paper. If there is anyone who would wish to collaborate, please feel free to write me.

In 1959, the renowned American anthropologist, George Murdock, published “Africa: Its peoples and their culture history.” Despite having little experience in Africa, Murdock used available resources to create a comprehensive picture of the distribution of ethnic groups throughout Africa.

The study of ethnicity in any context is fraught with inherent difficulties. Ethnicity is fluid, with members of ethnic groups defining and redefining their respective ethnic groups in response to personal, economic and cultural changes. Marriages can change ethnic definitions, the attraction of certain social services can induce changes, and the need to band together against common enemies can prompt the formation of new, unseen ethnic groups.

The American model is a prime example. Whereas 70 years ago, the United States provided home to a number of ethnic subgroups such as Poles, Ukrainians, Irish and Germans, we have boiled down our ethnic definitions to create a comprehensive group of white Americans, largely defined in contrast to that of marginalized minority groups. Similarly, people of Asia, Africa and worse yet, “Muslims”, seen through the lens of European societies, are often classed into the same ethnic group, despite having little relation to one another historically.

To top this off, any geographic assessment of ethnic boundaries can only be viewed cross-sectionally, spatial boundaries of ethnic groups subject to adjustment in response to temporal factors such as migrations, warfare, weather events and economic opportunity.

Despite these limitations, Murdock’s perhaps naive map remains an important and unique resource for Africanists. Assessments of spatial distribution of events within Africa are plagued by difficulties presented by the present political boundaries. These boundaries often inefficiently reflect the distribution of ethnic and social groups, and more reflect the exploitative priorities of colonial powers and, to a lesser extent, obstacles of topography such as rivers and impassible mountain ranges.

Murdock lists no less than 835 ethnic regions, likely largely characterizing distinct linguistic groups. He likely overlooks linguistic and cultural variation within these defined groups, and, of course, lacking the benefit of large scale surveys, partitions groups with little regard for the myriad ways in which humans identify themselves. I can safely say that he gets it wrong in Malawi, listing only three ethnic boundaries in a country that lays claim to at least 20 self-identifying groups.

Incredible. For a continent that houses less than one sixth of the world’s population, the level of human variation is staggering. If Africa were to establish it’s national borders based on ethnic or linguistic identification as Europe has, the number of resultant countries would dwarf that of the number of countries of the present world combined.

Using the ACLED database, I counted conflict events within each of Murdock’s spatial designations. I did this to obtain a finer level of the distribution of conflict, and to likely obtain a more realistic picture of the extent of conflicts, which are sometimes (but certainly not always) waged along ethnic lines. What we get is the two maps below, one being conflict events based on present state borders, and the other on Murdock’s map. Blue indicates low numbers of conflict events, red indicates high numbers.

The difference is striking. Looking closely at the map, one can see that conflicts events largely occur within Murdock’s ethnic boundaries. Now, before one jumps to the conclusion that all conflict in Africa is ethnically motivated, conflict events often occur near rivers or state boundaries that are set by rivers so it is no surprise that these maps might match up. Also, generating any type of higher level partitioning of geographic areas will result in a more informative map. However, these results should at least inform future analytic methods, based not on existing political boundaries, but rather on unseen local delineations, some of which may or may not be readily apparent nor accessible.

Performing a hot spot analysis on the data to find areas of clusters of magnitude, in this case event counts, that would be higher or lower than expected, given the counts of a region’s neighbors. I also included a count rendering of the respective counts of each area. I was able to produce the following: 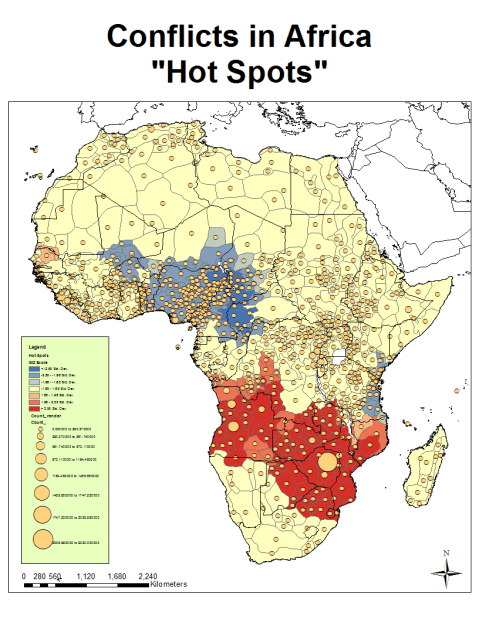 Conflict events are largely concentrated along a swath that spans the southern region of Sub-Saharan Africa, with spatially sparse events occurring in the west. The largest number of events occurs within the borders of Zimbabwe, nearly all of which have been violent actions against civilians by a repressive and brutal government.

Thanks to Prof. Nathan Nunn at Harvard for providing a shape file of the Murdock map.

High res versions of the graphics on this page: