The Invasion of Iraq Began 10 Years Ago 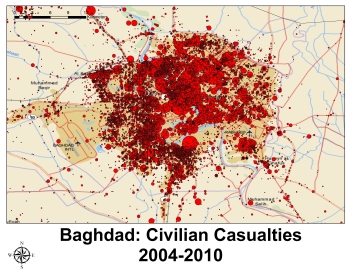 The ending to Vietnam was easy to recognize. We have the iconic pictures of the last helicopter on it’s way out to freedom to prove it. The end of WWII came with capitulations from Japan and Germany and a cessation of fighting.

If the media is to act as a guide, the end of the Iraq war (which was really an invasion) is not so clear. I would even speculate that most Americans think that the war is still on in full force. (To be charitable, they might not realize there’s a difference between Iraq and Afghanistan.) Despite this perception, iCasualties, a web site which tracks deaths in Iraq and Afghanistan only reported one military death in 2012 and, so far, none in 2013.

The Iraq Body Count site, however, listed 355 civilian deaths last month. The question is, though, where does the war stop? I find it hard to believe that there weren’t violent deaths previous to the entry of the Americans. A look at the listing of deaths lists attacks in markets and police stations, random roadside bombs.

Most troubling to me are the targeted killings of educators, University employees and academics. Though it may be unpopular to say so, there comes a point where we can’t blame ourselves any longer. Reading this list, I’m thoroughly disgusted. Hate the Americans if you will, but the killing of teachers and kids is inexcusable.

There is no doubt that the war was a colossal waste of resources, begun under intentionally fabricated pretenses for reasons which still remain mysterious to me. I sincerely doubt Bush had the intellectual faculties to come up with it on his own. The blame for the war goes to people like Robert Zoellick, Francis Fukuyama and Paul Wolfowitz and Donald Rumsfeld all members of the “Project for the New American Century,” a group which pressured Clinton to invade.

The saddest part is that the war was massively expensive, we haven’t really even begun to pay for most of it. The money came from low interest bonds. Of course, with inflation outpacing the interest rate on those bonds, we might not ever have to.

In relative terms, the Iraq war has been fairly cheap by historical standards, costing about $120 billion a year or around one per cent of GDP, compared to 45 percent of GDP for World War II. In absolute terms, however, the Iraq war is the “second most expensive war” in American history after World War II. According to Hormats, it has been financed largely through the issuing of treasury bonds, 40 to 45 percent of which have been bought by foreigners

These treasury bonds were bought at rock bottom interest rates, I might add (again). To be honest, I get annoyed when liberals start screaming about how expensive the war was. Perhaps they don’t know what a bond is but the absolute expense isn’t the problem. The scary part is (as it states above) that the war, in relative terms to GDP, won’t cost us hardly anything. This lack of financial pain just makes it easier for us to do it again in the future.

I wrote a couple of posts on Iraq back in 2009. A spatial analysis of the Iraq casualty data here, a time series analysis here and a movie here.

HRW did a great piece on torture and human rights abuses in Iraq.

I’ll include the movie here for posterity:

One response to “The Invasion of Iraq Began 10 Years Ago”