After being told that it was a hoax (by a kind reader of this blog who didn’t really say it was a hoax), Wikileaks released more than 400,000 military records from the Iraq war covering the years from 2003 to then end of 2009. This data will likely be ignored in the present political climate, but the historical and scientific significance of this data dump cannot be underestimated. It’s shocking really, that nearly a decade fighting two major wars, tens of thousands of American and civilian dead and trillions of dollars later, the Afghan and Iraq wars are a mere blip in a political climate that would allow a moron like Christine O’Donnell the chance to fill a Senate seat. We have truly become a Confederacy of Dunces, in the worst way imaginable.

The current press is touting this massive database as a smoking gun in the American involvement in Iraq, and will most likely play up the juiciest and most damning elements. There will be analyses of further torture past Abu Ghraib, civilian death counts which do not match previous estimates, but in all the finger pointing, the true extent of human costs of the war will be lost. It is to this end that I seek to inform and not blame. The war was wrong, based on lies and sold to an uninformed and uninterested American public coming out of 9/11 and still weighing the meaning of being drawn into a state of vulnerability to international terrorism that many other countries had been living in for decades. I do not present my analysis to point a finger at anyone as the players in the Iraq War are so many and the intricacies far outside my area of knowledge.I merely wish to illustrate the incredibly meaningless costs of warfare, through the scientific tools at my disposal. To this end, I will be presenting a series of statistical analyses of the Iraq War over the course of the next week.

Data: The full data set contains more than 400,000 records, but I have limited my working dataset to only those records which contain deaths. There are four categories of people contained in the data set, friendly (coalition), enemy, Iraqi army and civilian. Both numbers of dead and numbers of wounded are noted, but record keeping may or may not be 100% accurate. However, given the large number of records, it is quite likely that a significant percentage of them reflect more or less accurate numbers.

The map in the upper left of this post represents points of all deaths in Iraq between the beginning of 2004 and the end of 2009. Incidents are recorded for nearly all populated locales in Iraq, particularly those along major roads. Baghdad, of course, has the largest number of incidents. Breaking these up into civilian and coalition casualties, we get a more complete picture of how violence is distributed within the country. The maps below represent full country deaths and wounded, with dots proportional to the number of casualties. Larger dots mean more casualties noted in the record for that day, smaller dots mean less. Dots in all of the maps are to the same scale. That is, the size of each dot represents the same number of casualties in both civilian and coalition casualty maps below.

The differences between the two are striking. Many, many more civilians die and become wounded in conflicts than US and coalition forces. This is not to belittle casualties within the military, but the number are beyond disproportionate. Zooming in one Baghdad, the disparity is even more pronounced: 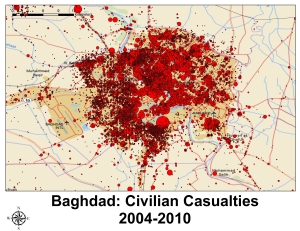 Whereas civilian deaths and wounded are splattered over Baghdad indiscriminately, US and coalition casualties are rather limited. Of course, the US military has the advantage of armored military vehicles, body armor and weaponry, but it cannot be denied that the greatest toll in human life is waged by the insurgency itself through suicide bombings, conflicts in open air markets and free for all urban warfare. Our presence in the country likely created the conditions necessary for such carnage, but I doubt that the American public ever had any clue as to the extent. Maps such as these make it clear the extent to which the Iraqi people have suffered and the stupidity of warfare.

Next: Time Series Analysis of the Iraq War Diary