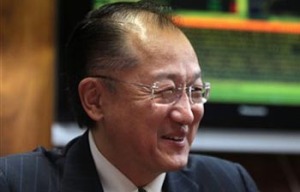 Dr. Jim Young Kim, former President of Dartmouth, has formally been named as the next head of the World Bank. It marks the first time that a Michael Jackson impersonator has been chosen to lead an international development organization.

The naming of Kim is somewhat anticlimactic. Jeff Sachs made a very visible appeal to the position, travelling around the world and obtaining the endorsement of high ranking figures in countries suchs as Kenya and Costa Rica. When the short list of candidates came out, which included Larry Summers, it was obvious that the Obama admin hadn’t even considered Sachs at all.

Kim was quickly named following the rejection of Summers by European members of the World Bank’s administration. Former and current executives at the Bank called to offer the position to either Ngozi Okonjo-Iweala, Nigerian Finance Minister or former Colombian Minister of Finance Jose Antonio Ocampo, both appropriate candidates.

Kim’s appointment is important as it represents the first time that developing countries had any say in who would lead the Bank. The influence of the BRICS is rising, and clearly with good results. The United States will likely be a dominant world power for decades to come, but it’s waning influence should be a welcome change.

Despite so much discussion world wide, it was disappointing that Kim would be offered the job to such little fanfare though this too, could be indicative of America’s more seemingly humble facade on the world stage. I believe that Kim will likely be the last American appointee for a while, though applaud his appointment.

Kim will make a fine leader for the Bank. Let’s hope that he leads it well.

I received the following from an unnamed source.

Dr. Jim Yong Kim today released a statement in response to his selection by the World Bank’s Executive Directors as 12th President of the World Bank:

“I am honored to accept the Executive Directors’ decision to select me as the next President of the World Bank Group. I am delighted to succeed Robert Zoellick, who has served with excellence and distinction during the last five years, and I am grateful to the Bank’s member countries for the broad support I have received.

I have spoken with Minister Okonjo-Iweala and Professor Ocampo. They have both made important contributions to economic development, and I look forward to drawing on their expertise in the years to come.

As President, I will seek a new alignment of the World Bank Group with a rapidly changing world. Together, with partners old and new, we will foster an institution that responds effectively to the needs of its diverse clients and donors; delivers more powerful results to support sustained growth; prioritizes evidence-based solutions over ideology; amplifies the voices of developing countries; and draws on the expertise and experience of the people we serve.

My discussions with the Board and member countries point to a global consensus around the importance of inclusive growth. We are closer than ever to achieving the mission inscribed at the entrance of the World Bank – “Our Dream is a World Free of Poverty.” The power of this mission is matched by the talent of the World Bank Group staff. May this shared mission embolden our efforts to end the disparities which too often diminish our shared humanity. Let us work together to provide every woman and man with the opportunity to determine their own future.”