Try as I might, I can’t seem to resurrect this blog. Lack of internet, exhaustion and general malaise prevented any worthwhile activity this summer.

I though that the camels might help, but alas….

So I’m appealing to you, the reader, to assist me. I am going to insert a number of guest blogs over the coming weeks. If you, or anyone you know would like a public forum on which to express your views on, well, just about anything, it’s here.

Any topics are free game, but I’m guessing that most people who read this blog have views and interests that somewhat align with my own.

Please submit your post to me by email if you like. I am sure that I will get nearly no response, but I figure this is worth a shot. 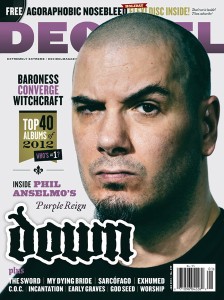 I had some free time today so I decided to apply some network analytic techniques to one of my favorite subjects: metal records.

A couple of weeks ago, I attended a lecture on network analysis where the investigators analyzed popular political books on Amazon.com.

Amazon lists not only information on the book but also the titles, in order of purchasing frequency, of other books that customers may have purchased. The researchers here were able to identify left leaning and right leaning books by examining the purchasing habits of Amazon customers.

Decibel “is America’s only monthly extreme music magazine” and has been in publication since 2004. Every year, they publish the titles of the 40 best metal records of the year, according to their review staff.

I looked all of these records on Amazon. For each of them, I noted which of the others were in the first 12 titles that were purchased with it, creating a 40 by 40 adjacency matrix where rows (i) and columns (j) represented records. For each entry, a zero was noted where the customer which purchased the i-th record did not purchase the j-th record, and a one where they did.

In network terms, the Degree of this record would be 15. Pallbearer’s “Sorrow and Extinction” had a degree of 11, Royal Thunder’s “CVI” and Blut Aus Nord’s “777: Cosmosophy” both had a degree of 9. 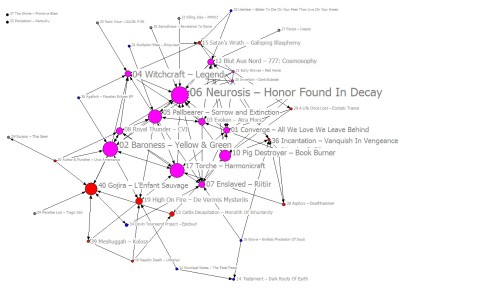 You can see that some records get purchased with other records more than others. The size of the dots represent the degree of the record.

Now, I did some cluster analysis on the data, looking for related groups of records within the network. Using R, I produced the following dendrogram:

There are two major clusters, each with its own subcluster (dendrograms are hierarchical). One includes Converge, Neurosis, Pallbearer Royal Thunder, Evoken and Inverloch with a subcluster including only the first four. These are all bands that might be expected to be purchased with one another. The other big one includes all the rest. Main clusters are designated by color.

I found one containing the three entries for Baroness, Municipal Waste and Napalm Death, very different bands. I’m truly not sure why those three would be in a cluster together (is the cluster is based on lonliness in the network?).

Anyway, I’m done, but glad I got any results at all. I’ll let readers (especially metal fans!) interpret the results.