Paul Ryan and the Power of Misinformation 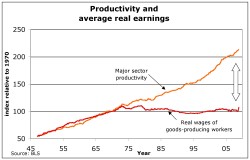 Paul Ryan champions the poor. So much so, that he wants to cut services for them. If he could save a buck by cutting even school librarians for elementary kids, he would. Eliminating egregious tax subsidies on the rich, on oil companies and big agricultural firms, not so much.

Part of his justification lies in misinformation. Ryan said yesterday: “”When government’s own finances collapse, society’s most vulnerable are the first victims, as we are seeing right now in the troubled welfare states of Europe.”

Ryan wants us to believe that Spain’s troubles are because of a runaway system of redistribution which inspires sloth in the poor, leaving them unable to feed themselves. What Ryan doesn’t bother to mention, is that Spain’s troubles are actually due to a real estate bubble, not dissimilar to the mess that predicated the crash of 2007/8 and the mess that lead to Japan’s nearly two decades of stagnant growth.

Greece arguably spends more on public welfare (28%). Greece’s problems, however, are as linked to the financial crisis of 2007/8, (the fault of the loosening of regulations by Americans) and the entry into the Euro, as they are to the problem of massive tax evasion, a cottage industry of Paul Ryan’s Republicans. Certainly, Greece (which was the fastest growing economy in the Eurozone from 2000 to 2007 despite social welfare expenditures), mismanaged their debts, but can we blame problems of tax evasion or currency exchanges on feeding poor people? Perhaps in Ryan’s world, we can.

But this might be too much for Ryan, who has plans of his own. As an Ayn Randian, he is, by definition, barred from searching for answers from without as he can most certainly fabricate his own from within. Honestly, I thought the only people that were into Ayn Rand were over caffeinated college students. I guess I’m wrong.

As an Ayn Randian, Ryan wants to eliminate the capital gains tax, presumably so that hard working folks can “enjoy the fruits of their labor.” Does anyone seriously believe that a person who has given a chunk of inherited capital to a firm to be gambled on the stock market actually does any labor at all? Productivity of American workers has gone up by 62% since 1989, but wages are only up 12%. Can anyone seriously claim that the average American worker is fairly enjoying “the fruits of his/her labor”?

But Ryan’s a “serious” guy. So serious, that he dispenses with worrying about facts and pushes his pro-rich agenda even further. No doubt this works well with Americans who have more to do than read about European financial crises (which is fine). As a public servant, however, he has a responsibility to accurately represent the facts. I recognize that statement in itself to be purely wishful thinking on my part.

Sweden: Could it have been a model for Michigan?

Business goes to Sweden because of its amazing metal scene

I just spent the last week in the amazing (though cold) country of Sweden. On my last day there, I was wandering lost in downtown Stockholm and stopped to ask an older gentleman for directions. He asked where I was from, I told him I was from Michigan.

I became instantly depressed as I realized that he was absolutely right. The similarities between Sweden and Michigan are vast. Both are cold areas surrounded by water and both are sufficiently blessed with natural and human resources to support a deep manufacturing sector.

By no coincidence at all, both areas are full of people of Swedish decent.

Most importantly, in contrast to Michigan, Sweden has one of the most active, dynamic and vibrant economies on the planet. In fact, riding in from the airport, one sees the headquarters of companies one would expect to see in a place like Michigan, world class manufacturing and tech companies that are all employing Swedes. In fact, Sweden is desperate for labor to support its booming economy. If you have any type of skill, there’s a job in Sweden waiting for you.

Sweden is the most economically equal country on the planet. The Gini coefficient for Sweden in .23 vs. Michigan’s depressing .45, the same as that of Bulgaria or Guyana.

Sweden has some of the highest taxes on the planet. A full half of income can be sent to the Swedish Tax Service. Sales taxes top 25% for most items. Alcohol is taxed at 100%. Taxes make up nearly half of Sweden’s GDP.

Contrary to Republican logic, this is due, in large part, to guarantees of government provided guarantees of quality health care for all that relieve businesses of having to bear responsibility for creating insurance plans. If the large number of boutique vinyl shops all over Stockholm are any indication, anyone can start a small business in Sweden. In America, one has to do without health insurance to start a business, a risk that only the wealthiest can bear.

In Sweden, like health care, pensions and unemployment insurance are funded through citizen contributions. This means that private businesses don’t run into the problem of becoming bankrupt when they lack money to fund their pension plans.

The Swedes are highly educated and healthy. This means that foreign businesses wanting to set up shop in Sweden have a vast pool of highly educated and able potential workers to draw from. In fact, Sweden’s biggest problem right seems to be that it lacks UNskilled service workers.

All of this is in contrast to the disastrous situation of Michigan, where we have gutted public education to the point where we have one of the highest drop out rates in the country. We get stupider by the day. Nearly 15% of Michiganders lack access to health insurance. Michigan workers are too sick and too uneducated to meaningfully contribute to the economy. Worse yet, the recent installation of emergency financial managers has erased any potential for improvement. Nearly half (note: the poorest half) of Michigan lacks political representation in 2012, clearly a dream come true for Republicans everywhere.

Why would any business come to a place like Michigan?

Mostly, I’ve returned depressed. Michigan had its chance and it blew it. Exactly why do I live here?