Is pollen associated with suicide? New paper (from myself and colleagues) in Environmental Research

Is pollen associated with suicide? That’s the question we sought to answer. Pollen related allergic rhinitis is associated with depressive symptoms, discomfort, pain, sleep disruptions, isolation and reduced quality of life in people who have them. Our team, led by UM researcher Dr. Rachel Bergmans, set out to test associations of suicide mortality in Ohio with pollen exposures using data from Ohio’s vital records and a novel prognostic, model based raster of daily pollen counts from Dr. Allison Steiner’s team at UM’s College of Engineering.

We explored associations of suicide with exposure to four types of pollens and the paper can be found here (Open access for 50 days). Suicide is serious. Though the causes of suicide are complex, pollen allergies are associated with depressive symptoms, isolation, pain, discomfort and for some, complete debilitation. #suicide#pollen#epidemiology

Background Seasonal trends in suicide mortality are observed worldwide, potentially aligning with the seasonal release of aeroallergens. However, only a handful of studies have examined whether aeroallergens increase the risk of suicide, with inconclusive results thus far. The goal of this study was to use a time-stratified case-crossover design to test associations of speciated aeroallergens (evergreen, deciduous, grass, and ragweed) with suicide deaths in Ohio, USA (2007–2015).

Methods Residential addresses for 12,646 persons who died by suicide were linked with environmental data at the 4–25 km grid scale including atmospheric aeroallergen concentrations, maximum temperature, sunlight, particulate matter <2.5 μm, and ozone. A case-crossover design was used to examine same-day and 7-day cumulative lag effects on suicide. Analyses were stratified by age group, gender, and educational level.

Conclusions While aeroallergens were generally not significantly related to suicide in this sample, these findings provide suggestive evidence for an acute relationship of grass pollen with suicide for women and those with lower education levels. Further research is warranted to determine whether susceptibility to speciated aeroallergens may be driven by underlying biological mechanisms or variation in exposure levels. 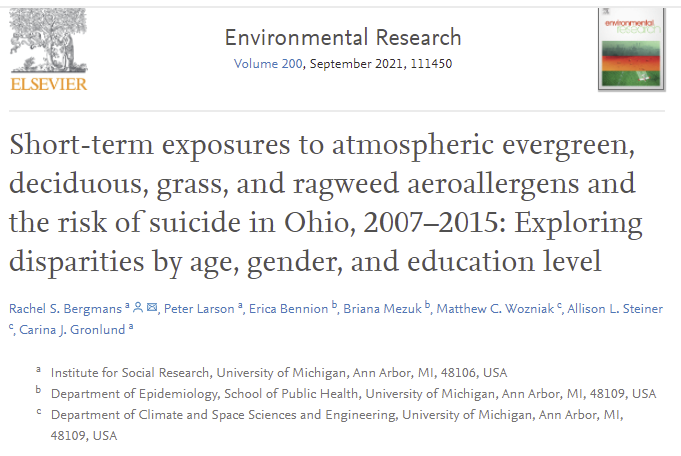