But people are doing it anyway, and, though the risks are very high, there have to be systems in place to minimize that risk and help insure the safety of customers and workers.

At least two bars in Ann Arbor, MI have had staff members test positive for Covid 19 within the past week. One did the right thing. They shut down operations and had their entire staff tested immediately. A couple of days later, they issued a statement informing the public of what happened and what they did. The other has yet to do anything at all, unfortunately.

Closures and public statements are good things, but maybe there’s another step that businesses can take to inform customers in a timely manner. I suggest collected phone or email contact information from customers each night.

Businesses would send out a text or an email message informing the customer a staff member tested positive and it is possible that they may have been exposed to covid19 and should get tested and isolate as soon as possible.

As this system would be voluntary, no privacy would be violated. It is likely that most patrons would consent to receiving such notices. Personally, I would like to know. I would also like to receive that information sooner rather than later.

A QR code app based system such as that being implement in South Korea would be preferable, but it is unlikely that such a system would be acceptable in the US, aside from issues of cost. A simple email list might be an easy, low cost method of informing the public when they might have been at risk for infection.

But so far, that’s not happening.

In the past week employees at a handful of business in the tiny college town of Ann Arbor have tested positive for Covid 19. I won’t name names because I think that each businesses needs to be afforded an opportunity to make create a response and write a formal announcement.

Responses, however, should be immediate. Any delay in messaging puts the public at unnecessary risk. Businesses should be required by law to immediately make it public when an employee has tested positive.

When an employee tests positive for Covid 19, operations should be shut down, and every employee of that business should be tested without fail. Once everyone has been cleared, people can return to work and operations might commence.

Every single person who entered those businesses or had contact with employees needs to be immediately informed that they might have been exposed to Covid 19. Businesses must do this so that patrons can be tested if possible and isolate themselves if necessary.

Businesses who fail to do these things should be shut down.

One business is currently still open. I have it on good knowledge that an employee tested positive for Covid 19 there, yet there has been no announcement and business moved forward as usual (at the time of my walking past it yesterday.)

Covid 19 is no joke. People should be staying at home. They should not be eating out. Restaurants, bars and entertainment venues should not be open, but they are. If we are going to reopen these places, we need to do so under strict regulation that keeps the public informed and protected.

Michigan, you are in trouble. 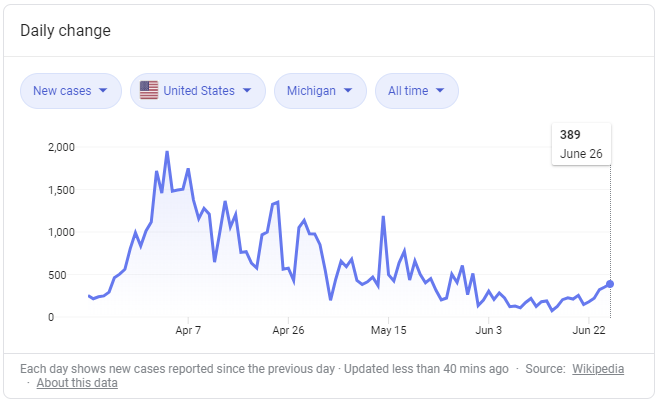 Assuming that nothing changes between now and then, we will exceed the peak of new cases found (1,953) in Michigan back on April 3rd…. by the middle of July.

Certainly, case fatality rates are down, but if disease is not, this leaves us with even larger numbers of people suffering debilitating disease. Some will suffer for years and some of them might die earlier than they would otherwise.

Local bars, restaurants and music venues are opening up and trying to get people to come out like they did before, albeit under new rules. Some places are making a greater effort to protect workers and customers than others.

A local bar discovered that one of their staff tested positive for Covid 19 and, to their credit, shut down operations and tested the entire staff. But the infected staff member could have been infected up to two weeks ago and could have infected other staff, who could have infected customers. Every single person who stepped into that building needs to be informed. Is there a mechanism to do this? Obviously not, but there should be.

Moreover, the public needs to know which establishments have positive cases and when so that people can judge the relative safety of businesses and can act accordingly when they believe that they might have been at risk. This is also not happening but it should be.

People will inevitably say “it is worse everywhere else.” That doesn’t do anything to help a person on a vent. We are in real trouble, we need to act like it.

What will the State of Michigan do about this? Will we have another shut down? What does this bode for the future? Whatever it is, it isn’t good.

So… wear your damn mask. Stay the fuck home. Get carry out. Ignore all these people trying to get you to go out and act like life is the same as before, because it just isn’t.

Covid19 report cards for businesses: it is time.

The risks of covid19 are well known at this point. While we all need to be sympathetic to the need for people to earn a livelihood, a living should not come at the expense of public health and worker safety. This should be a given.

I have seen some businesses who are doing quite well right now. While my sample size is certainly small and my observations subject to my own biases, it is easy to tell apart the businesses who make an effort and the ones who do not.

We should support businesses who 1) require masks without fail, 2) offer masks and gloves to both workers and customers, 3) limit the number of customers in the store at any given time and 4) build plexiglass shields to separate customers and workers.

We should not support businesses who take a lax approach to masks, do not offer masks to customers who don’t have them, allow large numbers of people in the store proportional to size and do not have plexiglass shields in front of the register.

All of these modifications are easy and cheap to implement. There are few occasions where there is any valid excuse for not doing all of them in normal retail and food service industries.

Which bring me to the the point of this post. How can customers know how seriously businesses are taking covid19? Certainly, online review sites like Yelp or Google are going to be helpful, but these do not provide any indication of progress that businesses might make (“evolution”) or provide standards so that we can easily compare one business with another.

Many municipalities provide public record of compliance with health regulations. The New York City Health Department performs unannounced inspections of all restaurants in the five boroughs at least once an year and makes the data public. The public can search for any food provider in the city for any type of violation and even has a grading system. The Washtenaw County Health Department and the Michigan Department of Agriculture and Rural Development conduct regular inspections of food service establishments within their jurisdictions and publish the results online. The worst offenders often make the papers.

We need such a system for all businesses to make sure that they comply with efforts to contain the spread of covid19. Consumers have a right to know whether a business is compliant or not BEFORE they make the decision to visit that business. While the logistics of such a system are complicated and likely expensive, they are necessary.

Will this be on our legislature’s agenda? Do local health departments already have the authority to implement such a system? Would businesses push back against cheap masks and plexi? Certainly, there are challenges to implementation, but it isn’t impossible.