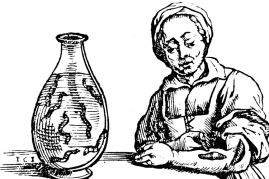 I found this great post on drug shortages that appeared in BMJ today.  Among all of the other great gems in it, was this incredibly interesting article on the creation of a mechanical bloodletting device. Jean-Baptiste Sarlandière, a French anatomist and inventor, created the “mechanical leech”, a device intended to extract a controlled amount of blood from the body. Sarlandiere intended the device to replace leeches, which were subject to increasing demand, were becoming expensive, were difficult to cultivate, and were subject to shortages in the Netherlands, who was a large producer of leeches at the time.

A paper was written on the device back in 2009, and within there is a dataset of leech imports and exports to France, which includes data on the monetary value of leeches and public consumption. Of course, I couldn’t resist pulling this data out and doing something with it (despite having better things to do.) 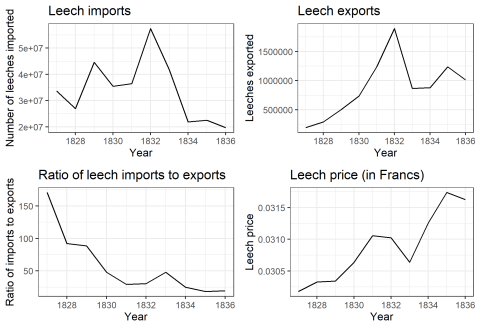 Of course, I am fascinated with this. The number of leeches exported from France rose during this period as did the market price of each leech. Though the entire industry would eventually collapse because other medical advances of the nineteenth century would supercede it, it is clear that increased demand and expense led to innovation to create devices to replace it. I don’t know whether the “mechanical leech” led to the development of other medical devices, but would like to think that even batshit ideas like how swamp worms draw out blood to cure any and all medical conditions would lead to the creation of methods which do improve health.