Health Care Expenditures and Life Expectancy – What is this picture really telling us? 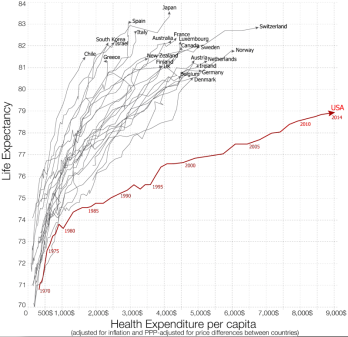 I keep staring at this picture, which appeared on “Economist’s View” last March and wondering exactly what I’m supposed to learn from this, aside from the obvious fact that health care in the US is too expensive.

We have known that health care in the US is too expensive for a long while now. We are also pretty sure of the reasons why, none of which are easily solved.

But we shouldn’t assume that there is a causal relationship between health care expenditures and life expectancy. The message here seems to be that other countries increase their health budgets and their citizens live progressively longer, but for some reason it doesn’t work in the US. Well, I don’t think it works anywhere.

There’s no evidence to suggest that extra spending this year will increase life expectancy this year. If anything, it is long past expenditures and improvements to health care that will increase life expectancy today. I think that if we looked at overall economic growth and life expectancy, we would see the same trend. Most of us will live longer, because we were born under better conditions than our grandparents, not because of government spending for health care, the vast majority of which goes to the elderly.

What this tells us, though, is two things: one, that health care in the US costs too much and seems to be increasing without bound (math talk). Second, that life expectancy in the US is shorter than these other countries. This is true, but the US is a fundamentally different place than any of the countries on that list, some of which has to do with social problems (racism) and some of which likely has to do with the fact that we take in larger numbers of immigrants from countries which have low life expectancies than any country on that list.  These places aren’t comparable. While solving the problem of racism is noble, I don’t think that many people (except our President and his bigoted minions) want to suggest that we increase US life expectancy by deporting immigrants or closing the door to people from, say, Africa.

But we should be careful not to take home the message that there is an intrinsic relationship between spending and lifespan because that would be just misleading in my opinion.