I’m getting used to the new version of ArcGIS (which is a vast improvement!) and gave it a test run on some data from the ACLED (Armed Conflict Location & Event Data Project) database, specifically on this years round of violence surrounding the Kenyan election. ACLED keeps real time data on violence and conflict around the globe, the latest entry in 2017 is Nov 24, just five days ago. 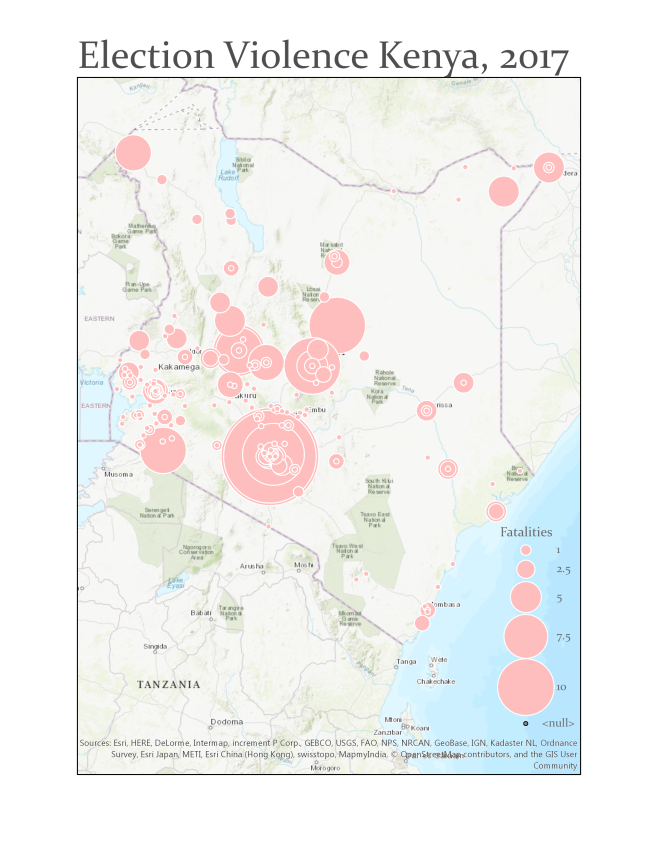 The first election occurred on August 8th, 2017. The opposition contested the results of the election, claiming problems in vote tallying by the IEBC, resulting in a nullification by the Supreme Court. A new election was called and was to be conducted within 60 days of the nullification. Raila Odinga, the opposition leader, claimed that the election again would not be fair, dropped out of the race and called for a national boycott. The election went ahead as place on October 26, 2017 and Uhuru Kenyatta was declared the winner. 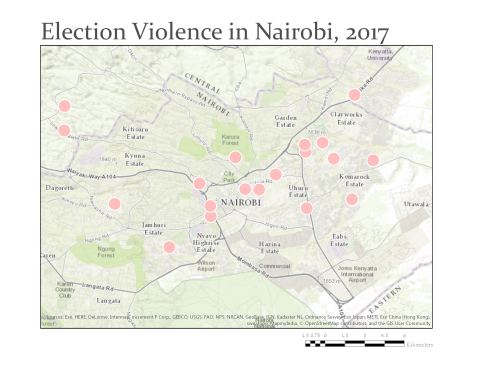 There was violence at every stage of the process, both by rioters in support of the opposition and by the police and military who were known to fire live rounds into groups of demonstrators. Opposition supporters were known to set fire to Kikuyu businesses. Local Kikuyu gangs were reported to be going house to house rooting out people from tribal groups from the West and beating them in the street. Tribal groups in rural areas were reported to be fighting amongst one another. The police response has been heavy handed and disproportionate leading to a national crisis.

As of now, though not nearly as violent as the post election violence of 2007-08, the violence has not yet abated.

In the database, there were 420 events logged, including rioting, protests and violence against civilians by the state, police and local tribal militias. There are 306 recorded fatalities in the data base, but this number should be approached with some caution. There were likely more. The database is compiled from newspaper reports, which don’t count fatalities and don’t cover all events.

I made two maps (above), one for Nairobi, and the other for Kenya. They include all non Al-Shabaab events (a Somali Islamist group the Kenya Defense Force has been fighting for several years.) I also included a time series of both events and fatalities.

Some excerpts from the notes:

“Police raided houses of civilians in Kisumu, beating civilians and injuring dozens. Live bullets were used on some civilians, including a 14 year old boy. Of the 29 people injured, 26 had suffered gun shots.”

“One man was found dead in a sugar cane plantation one day after ethnic tensions between the Luo and Kalenjin communities got into an ethnic clash. The body had been hacked with a panga.”

“Rioters started throwing stones at the police in the morning, protesting against the elections to be held the next day. The police responded with teargas and water canons. The rioters were mostly from the Luo ethnic group and they took the opportunity to loot several stores, attack residents and to burn a store owned by an ethnic Kikuyu. One woman was raped.” *This was in Kawangware, not far from my apartment. I was eating at a local bbq place when this happened.

“Police forces attacked supporters of the opposition that went to the Lucky Summer neighbourhood to check on a ritual of beheading of a sheep that was taking place (suspectedly by the Mungiki sect). The police shot at the civilians. The police confirmed that it shot a man and that the group performing the ritual had sought protection.”

“As a revenge to the previous event, the Kikuyu joined forces and attacked the Luo. The ethnic tensions and violence led to one severely injured person. Residents claims three were killed and dozens, including three school children, were injured.”