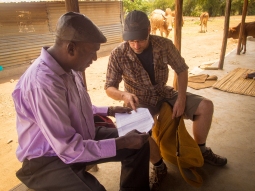 A staged picture. With Paul Diela, our team manager in Mbita.

As I’ve noted in previous posts, we’re doing some research on snakebites in two areas of Kenya. I came out to Mbita in Western Kenya to do some routine management things for the demographic surveillance system that I run. This gave me an opportunity to go out and visit some houses of people who had indicated that someone in the family had been bitten by a snake in the past.

Today brought us to the Gembe East area of Mbita District in Homa Bay County, an area most associated with malaria transmission (of which I’ve written papers on). The Usao area we visited today is probably the poorest area of Gembe East. Roads are almost non-existent and the cell network is even harder to find. Among kids, skin infections are common, as are untreated wounds and eye infections. One kid has an eyeball so swollen that he couldn’t blink.

Discarded Coartem and Artefan packs litter the area. When I’m in the villages I always check the trash. It’s a great indicator of the public health situation. I often think that people should give up on surveys and just start mapping drug waste out here. At least we wouldn’t need to go through any (or at least few) bureaucratic hurdles.

We hired a single staff member at the last minute, assisted by a graduate student from Japan, hired a car and took off this morning to get here.

To find the snakebites, we compiled a list of houses where people had reported snakebites and then coordinated with our DSS staff to find them. Our registration system allows us to easily find houses in our survey areas, a real asset when one is doing these kinds of follow up surveys. 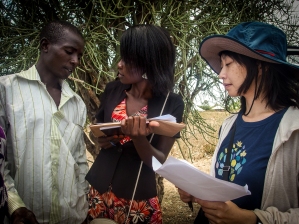 The first house we went to was vacant, everyone had taken off to do their daily chores. I became worried at this point since this area is so challenging to get to. Our list indicated that the neighboring house had a snakebite victim so we went over there and found the lady more than willing to talk.

Her son had been bitten ten years earlier by a puff adder in the space between her house and the water. Fortunately he didn’t suffer any permanent damage, but given that two houses right next to one another both experience snakebites, the area has to be considered somewhat dangerous.

She didn’t take the child to a clinic, instead enlisting the help of the local witchdoctor. Local practitioners treat snake bites by making small cuts around the wound, ostensibly to cut off routes that the venom can use to spread, then they apply a salve containing local herbs. The nature of the herbs is unknown. I plan to try and find one of these guys and see what it could possibly be.

Giving up, we returned to the market area, and suddenly several people came out of the woodwork claiming to have been bitten in the past. Some of them were in our list. Lucky day. 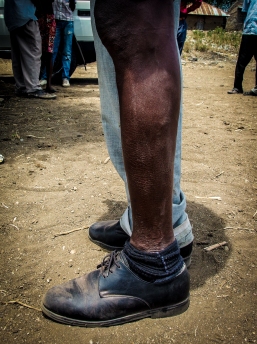 One gentleman had been bitten on the leg several years previous. He didn’t suffer any major damage, but the skin surrounding the wound is now scaly and tend to come off. Again, the culprit was a puff adder. The locals claim that the snake causes a persons skin to become snake-like, even shedding occasionally, just as a dog bite (rabies) causes a person to bite like a dog (it’s disconcerting how familiar people are with the symptoms of rabies here).

Our regular DSS survey worker pointed out that many people don’t want to report snakebites, presumably because of the associations with witchcraft. He also noted that when people hear about other people reporting bites, they tend to want to report them too. We had one lady who claimed that she hadn’t been bitten, but today was eager to talk about it. Just about everyone has some story about a snake, it appears.

After doing about six surveys, almost all of which were puff adder bites, we moved on. Most of the wounds we saw were minor. Some wasting of the legs, some skin problems, but no paralysis or debilitating long term issues.

A 12 year old boy, however, had been bitten on the hand by a puff adder about three years ago. Fortunately, his mother took him to the clinic immediately. He spent a month in the hospital, likely on intravenous antibiotics because the venom had destroyed most of the tissues in his left arm. Amputation was avoided, but he no long has full use of the arm and the hand is permanently deformed. 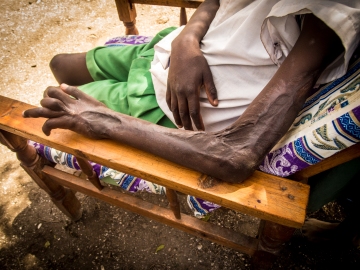 The survey worker tried to get the child to identify the snake by showing him a picture of other many kinds of snakes, but it had all the hallmarks of a serious puff adder bite. Clearly there was rotting of the tissue all the way up to shoulder and the joints were permanently bent. The elbow no longer moves due to the lack of muscle tissue and cartilage. The kid otherwise is a normal 12 year old boy. He is lucky to be alive.

Only two of the ten surveys today indicated that people went to a clinic for treatment. Someone noted that getting to the clinic is nearly impossible unless you have a motorcycle, and most of the people here just don’t have the means to call one. They opt for the witchdoctors, who make snakebites a principal part of their practice. Whether it is effective or not is unknown. Likely many minor bites might have resolved themselves on their own. Serious bites likely result in death so we’ll never know. 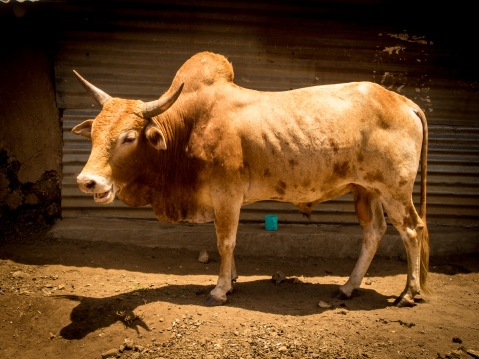