Does the environment cause poverty?

African countries are blessed with ample cropland and resources, but suffer from crippling and unforgivable levels of poverty, have some of the shortest lifespans on the planet and the highest rates of infant mortality in the world. Meanwhile, Japan, Korea, Sweden, Switzerland and Singapore are wholly the opposite, yet mostly lacking in everything that Africa has. Clearly, the picture is more complicated than merely having access to a natural resources.

However, within countries, the picture might be different. African countries are complex and diverse places. Poverty is often confined to the most unproductive regions, areas with poor soils, poor rainfalls or dangerous terrains.

I was just working with some socio-economic data from one of our field sites, and noticed some interesting patterns (note the map up top). In Kwale, a small area along the Coast, socio-economic levels vary widely, but neighbors tend to be like neighbors and patterns of socio-economic clustering emerge.

Note that the poorest of the poor are concentrated to an area in the middle, which I know to be extremely dry, difficult to get to, difficult to farm and generally tough to live in.

I tried to see if socio-economic status (as measured through a composite material wealth index a la Filmer and Pritchett but using multiple correspondence analysis rather than PCA) was related to any environmental variables that I might have data for.

I fit a generalized additive model using the continuous measure of of wealth from the MCA as an outcome. Knowing that very few things in nature or human societies are linear, I also applied smoothing to the predictors to relax these assumptions. The results can be seen in the plot at the bottom.

A few interesting things came out. While it is hard to tell much about the poorest of the poor, we can tell something about the most wealthy. The richest in this poor area, tend to live in areas with the richest vegetation (possibly representing water), a high altitude (low temperature), high relief (no standing water) and in locations distant from a wildlife reserve (far from annoying and dangerous wildlife).

I’m not sure the wildlife reserve is meaningful (unless the reserve was an area undesirable for human habitation to begin with), but the others might be and represent a trend seen in other Sub-Saharan contexts. Areas without malarious swamps and ample farm land tend to do the best. Central Province, one of the most developed areas of Kenya, would be an example.

But the question has to be, does a harsh environment doom people to poverty, or do people self shuffle into and compete for access to more favorable areas? Is environmentally determined poverty (or wealth) an accident of birth, or the result of competitive selection?

Alright, back to work. Oh wait, this is my work. Well…. 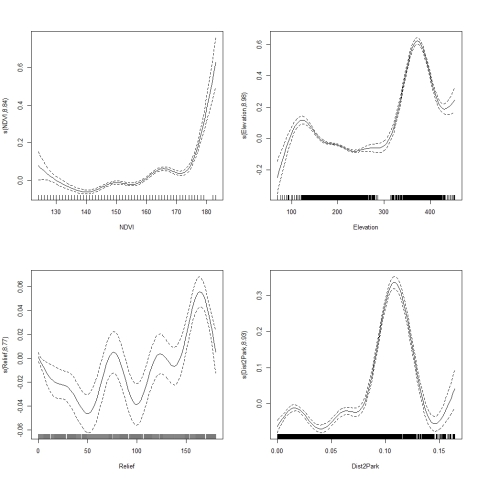 Results of GAM model of SES in Kwale. Y axis is the continuous measure of socio-economic status.