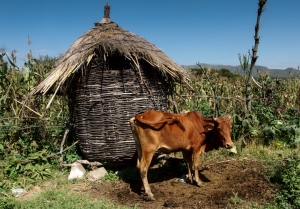 I went on a hunt for some sick animals… and finally found some! We were visiting some families in Gembe East, and area close to Mbita Point in Homa Bay County and found a man who had more than 50 goats and nearly 20 cows. In Maasai-land, that’s a tiny herd, but in Luo-land, its gigantic.

He had a sickly goat which had just aborted, vaginal discharge, was feverish, emaciated and had a hard coat. A friend suggested it might be Brucella, but without a test, we’ll never really know. Either way, I suggested that it might not be a terrible idea to make choma out of it (as he said he was going to do) and get it away from the pregnant lady in the house. He reported that there had been a couple of other abortions in his herd.

The cows in Luo-land don’t look very good. It’s possible that the scant rains recently are having an impact on the vegetation. Pink-eye is everywhere right now.

So much is made about potentially zoonotic diseases in giant pastoralist herds, but the issue goes mostly ignored around Lake Victoria. Though animal possession per household is low, there are more households living in more densely populated conditions, meaning that there are potentially more animals per square kilometer in Nyanza than in Northern Kenya.

A combination of high human and animal density, poverty and a shared water source could create perfect conditions for a zoonotic disease outbreak.