Interview with an academic: Ben Brucato 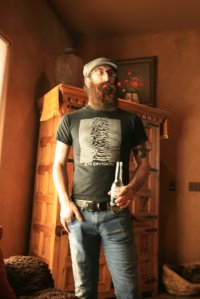 Continuing my series of interviews with interesting people I know, this week I spoke with Ben Brucato, a PhD candidate in Science and Technology Studies at Rensselaer Polytechnic Institute in Troy, NY. You can read more by and about Ben at his website, www.benbrucato.com.

Tell us about yourself and what you do.

I’m a husband and father. I live in upstate New York because it’s where my doctoral program is located. I look forward to moving on. I’m currently a doctoral candidate and teaching assistant at Rensselaer Polytechnic Institute in the Science and Technology Studies department. I have taught periodically as an online instructor in the Sociology department at Northern Arizona University, where I earned my MA. I’m about to start teaching as an adjunct at Union College in Political Science. I came to RPI to study with my advisor, Langdon Winner. I’ve been a musician since I was about 10 years old, and have played in all sorts of bands. I’ve been making noise as Clew Of Theseus (and other projects) since 1997 or so. I’m in a black metal band that’s trying to get off the ground. I started a label in around 2001 or so, called Cathartic Process, which releases noise and power electronics. Lately, it’s been a cassette-only label. It’s been very slow going the last couple years, though.

Every academic has a history. What brought you to this arena?

College was the expected thing to do after graduating high school. I intended to go to graduate school right away. Through my activist work, I met and became good friends with Joel Olson. He was just finishing his PhD and trying to find a job. Seeing that process put me off of my intentions to be a professor. I came back to graduate school after a nearly decade-long advertising and marking career. It was soul crushing and I hated everything about it except the paycheck. After the last place I worked was essentially liquidated and my unemployment ran out, I started considering other options. Spending a couple years being broke again changed my expectations. I knew I could go back to school and have a reliable but small income from stipends. It was a way to get by for a few years more than a stepping stone in a career trajectory. It would be nice if it ends up being the latter.

You have a black metal/noise history. What’s that about and does it inform your present work? Do you find extreme music to be helpful to your academic work?

I’ve been a noise artist for a while now. That was always more important to me than my professional life. Now that I’m finding more satisfying theoretical and topical issues to explore in my work, my studies and writing is more personally rewarding. But I don’t think these really inform my work that much. The themes in black metal and noise have me more attuned to the extreme, the pessimistic, and so on. I’m sure there’s something deep inside me that draws me to both fanatical politics and extreme metal, to cosmic pessimism and the bleakest industrial noise. I’d like to offer some more profound explanation, but any real connection is at an affective level that resists verbalization.

It might just be me, but I’m thinking that reports of police brutality are becoming more prominent in public discourse. First, is there evidence to suggest police brutality on the rise? Second, what do you make of the fact that, despite increased public awareness of police brutality and abuse of power, that no pubic representative (to my knowledge) has commented on the problem? Third, I feel that issues of police brutality were softened in the 90’s by TVs shows such as COPS, which forced viewers to watch through the perspective of officers, but that public opinion seems less empathetic to police in the YouTube era. Producers necessarily had to defer to the police to make the show. It’s my opinion that it very much matters who holds the camera. Do you find that the new trend of citizen produced (or edited video) is changing attitudes to police brutality? Or has nothing changed at all?

What counts as police brutality? What would it mean for police brutality to be “on the rise”? I don’t think there are clear answers, and that the terms discussing these have to be tentative, provisional operationalizations. They have to be tied to a context and to texts, to discourses and the places where they emerge. My research is mostly tied to the visibility of policing and its violence. Some researchers have addressed the idea that because police use-of-force is now more visible, the perception is that standard, ongoing police activity – including use-of-force – is becoming more prevalent, more invasive, more violent, and so on. The research on incidence and outcomes of use-of-force by police is incomplete, and there are few longitudinal studies. Without quality, national-level, longitudinal research, most assertions about these things are speculative. I am, however, comfortable claiming that use-of-force incidence remains stable, and I think there is some reasonably reliable empirical basis to support this claim. The bulk of my research is motivated by trying to understand, on the one hand, why the Rodney King beating prompted a national conversation and nearly led to a crisis for the policing institution as a whole. Yet, on the other hand, we are now presented with a new documentary video of a police beating or shooting about every week and without the same national conversation and crisis of legitimacy. What explains this? As I’m finding, there are many reasons for this that work together to explain it. I’d say the most common reaction I hear is that people are becoming “desensitized.” I think that has very little explanatory value. I’m sure it contributes, but that’s not an explanation I spend much time exploring. I think you’re on to something with the reference to COPS, which predates the Rodney King beating. I think we have a “toolbox” of codes and symbols we use to interpret these visualizations and representations of police violence. Reality shows like COPS, and all sorts of other cultural artifacts help people decode these images. Most of our toolboxes are full of lots of white supremacist and classist codes that are used in interpreting these videos. So, the purported objectivity of video – which the intentional and politicized monitoring of police in some ways relies upon – is suspended in doubt, here. The idea that video and cameras will change policing in some ways relies on the idea that these images will be received without any need for interpretation, that “what really happened” will be laid bare, and any reasonable viewer will be offended by the common violence the police rely upon.

I am interested to see the shift in public attitudes toward surveillance that has been occurring throughout the past decade. In the 00’s, there seemed to be a general acceptance that government would use any means necessary to weed out terrorists (for example). Now, it seems that the public is much more concerned about the issue. Do you think this shift can be sustained?

I think the issue is barely cut and dry. I think there is a lot of cognitive dissonance that occurs here. The less fascist people even have trouble squaring their demand for security – presumably which can only be supplied by the state, and violently so – with their desire for civility and democracy. Then, of course, you have the bold-faced authoritarians who love when cops beat Black bodies, and wish they would more frequently. More recently, vigilante activity seems to be on an upswing, as white supremacists – as they have been wont to do in the past centuries – have joined with state forces in doing this policing, i.e. George Zimmerman. But then there’s the inherent conflict in a class-divided society the police are first and foremost designed to maintain, protect, and administrate. I don’t think more people are aware and concerned as a result of consciousness-raising, more visibility, and so on, but rather as a result of more historically privileged people falling into the working class after the financial collapse. White folks are more frequently on the receiving end of invasive policing, surveillance, and so on. Some of them are quite happy to see the force of a racist regime demonstrated. Some white folks are offended that they occasionally are made subject to it, e.g. at TSA screenings in airports, roadside checks and searches, etc. Suddenly they speak up when the policing that people of color and sexual minorities have been subjected to is inflicted on them. But there are a handful of these folks who have either some class consciousness or moralistic defense of egalitarianism that inspires their feelings of offense as these situations are more widely spread and visible.

I’m generally not that interested in the theme of privacy. So we’re already past an area of discussion that I have much to say about. As for the distinctions between government surveillance and private surveillance, and how the latter contributes to invasions into our lives and affairs, and even the structuring of our navigation and negotiation of everyday life, I’m rather interested, intellectually, and concerned and committed politically. I think any blind spot here is simply a result of the fine-tuning of my own research that more obsessively focuses my attention to state violence and state surveillance. But both policing and surveillance are phenomenon that exist beyond the state, and particularly more so during the processes of neoliberalization. Private prisons, private police, and the like are just the tip of the iceberg.

What projects are you working on now, what should we look for, and where do you see yourself in 10 years?

I’m not so sure higher education will be very recognizable in 10 years. I’d like to say I see myself as a tenured professor, teaching a small load of courses of my own design while conducting smaller but long-term (and funded) research projects. But I think that’s not a very realistic projection even for those who are lucky, well-connected, and have a history of careful planning for such a trajectory. But if I entertain that fantasy a little, you could expect something like this: First would be a book on critical technology studies that takes the work of people like Mumford and Ellul as they were responded to and developed by Langdon Winner, David Noble, Richard Sclove, and others. It would characterize and develop their work, showing its relevance to understanding technology today. There would also be a book on surveillance and policing, focusing especially on the political fantasies and imaginations about transparency. The latter would obviously be based on my dissertation work. Ideally, I’ll be teaching in northern Europe, struggling to learn the local language, and be well along the way toward building a sustainable eco-village.

What’s up with the beard? I’m thinking that it’s a symbiotic living entity.

It’s a habit more than a symbol. Although, the statements it does make (except “I’m a hippy”) are generally ones in which I find more positive than negative.