I’m reading an article on African firms and why they don’t seem to grow.

There is an urgent need for job creation in Africa yet something seems to be stunting firm growth. This column shows that African firms are about 20% smaller than their counterparts in other locations. It suggests small firms put the brake on growth as the burden of dealing with government and labour costs may increase with size, or perhaps as they start facing trust issues between managers and workers.

Wow. This pretty much sums it up. African business can’t grow because of onerous regulation, corruption and a general problem of too many people wanting too much of the pie.

I wondered for a while why ladies selling bags of rice, for example, might choose to sell the same rice right next to one another for the exact same price to the exact same market. All of them would make much more money and market prices would be much lower and more competitive if a few of them would band together and form multi-lady shops. I thought it might be because the ladies don’t trust one another to enter such a relationship, but I’m thinking that raising the profile of an enterprise might invite all kinds of new and expensive problems. It still might be true that the ladies don’t trust one another, however.

The overall price level in Africa could also be a factor in determining the size of firms (Gelb et al. 2013). Relative to low-income comparators like Bangladesh, Vietnam and also India, African countries are considerably more costly. In absolute terms, and excluding South Africa as a middle-income country, the average purchasing power parity for a sample of African countries is about 20% higher than the average for the four poorest comparators (Bangladesh, Indonesia, Philippines and Vietnam). Africa’s higher costs may result in a lower level of competitiveness and consequently, in a distribution of firms that is different (smaller) than distributions in other countries. African firms may also face a steeper labour cost curve; as firms become larger and more productive, their labour costs increase more in other regions of the world.

Africa is just about one of the most expensive places to do just about anything, simply because you have to do and provide so much on your own. Our research activities come at incredible expense despite the fact that labor is far, far cheaper. If you need power, you have to figure a way to deliver it yourself. If you need skills, you have to pay to train up people to perform the duties you need. If you need supplies, you have to order them from overseas since very little of what you need is manufactured on the continent.

Next, I’m looking at the graphic below and seeing that Africa only spends about .8% of all worldwide R&D dollars, despite housing a sixth of the world’s population and even including South and North Africa. 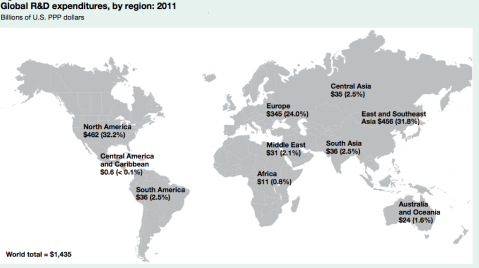