Could Westgate Have Been Part of An Increasing Trend in Violence in Somalia? 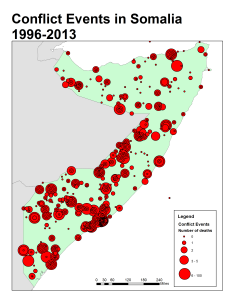 I’m sure it’s obvious that I’m still trying to process the recent events in Kenya. I became interested in knowing if the attack was perhaps part of a greater trend of violence in the region, particularly Somalia.

The Armed Conflict Location and Events Database logs all conflict events around the world in one location. Events are recorded from newspaper reports, NGOs and self reports from people on the ground. I downloaded the latest version of the data and restricted the dataset to only Somalia.

It turns out, that violence has been on the rise in Somalia since at least 2005, with a small break around the time of the global financial meltdown, then rising consistently from 2010. The Kenyan military, who have been blamed for the attack, didn’t arrive in Somalia until October of 2011. Sadly, their entry hasn’t been associated with a decline in events.

It’s worth noting that Doctors Without Borders exited Somalia last August due to kidnappings and violence, part of a greater trend of attacks on aid workers. Even before that, news reports were telling of increased attacks around Mogadishu.

The Economist reported increased numbers of attacks in Iraq and speculated that it was part of a wider, global trend. If this data on Somalia is to be believed, the world should start bracing itself for even more carnage. Again, I’m quite conflicted on what might be the causes of this violence, most of which is waged on targets that have little to do with Americans (despite what Ron Paul would like you to believe). I’m also at a loss as to what to recommend to do about it, but ignoring this worsening problem will not improve the situation at all.

Just got an email from the OMICS Group, whose tagline is “Advancing Scientific Discovery:”

The purpose of this letter is to formally invite you, on behalf of the Organizing Committee, to be as a speaker at the upcoming 3rd World Congress on Virology during November 20-22, 2013 at DoubleTree by Hilton Baltimore-BWI Airport, USA.

The main theme of the conference is Exploring Novel Approaches on Virology which covers a wide range of critically important sessions.

Work Shop on What Type of HIV Vaccine Research Should be Promoted?

Of course, it’s entirely odd that they would invite me to speak on viral diseases given that I have never done any work at all on them.

OMICS, in addition to sponsoring numerous scam conferences and workshops, can also proudly claim to be the publisher of more than 300 journals, none of which I’ve ever heard of. They can also proudly claim to have one of the most scathing Wikipedia entries I’ve ever seen. Numerous articles have questioned OMICs’ legitimacy, and even the US Government has asked them to cease listing any affiliations with the NIH and the HHS.

Of course, they do appear on the black list of scientific publication houses at the Scholarly Open Access blog, which tracks the world of scam publications and conferences. Avoid at all costs.

Update: It’s worth noting that OMICs shares a building with a PayDay Loans place, a shady credit card company, and a company that will help you get out of paying speeding tickets.

Violence in Africa, a continuing threat

African countries are certainly no strangers to violence, thought the past few years have seen an extended period of relative peace. The incredible bloodshed of the 90’s seems a distant dream at this point.

However, since the awful attack on Westgate Mall in Nairobi ten days ago, it’s possible that other groups have been emboldened to stage dramatic attacks on weak civilians.

Boko Haram, an Islamic separatist group in Northern Nigeria, shot and killed more than 40 students at an agricultural college in Nigeria. They arrived in the middle of the night and shot them all while they slept. The college could not afford proper security, though it’s doubtful that the even would have been fully prevented. Security details in Africa, particularly for Africans is sadly lax.

It is certainly possible that the attack had nothing to do with Westgate at all, though it isn’t coincidental that in both cases, high profile symbols of Western style development were targeted. While past attacks included embassies, ports and high profile targets like New York City, I fear that global terrorism might be moving to easier and smaller targets in Sub-Saharan Africa. This, of course, puts us involved in global health and development at awful risk.

During my conversations with my colleagues over the past week, the most common phrase has been “these are the risks we take.” While it’s certainly risky for us, for Africans trying to improve the lot of their countries, it’s entirely worse.

I think of those 40 students, who were guilty only of trying to educate themselves and perhaps become successful farmers or entrepreneurs. It’s entirely sad.