Not All GDP Measures are Created Equal 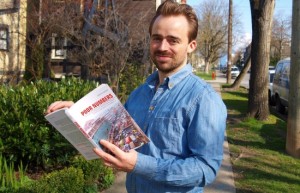 Recently, I got the pleasure of seeing a lecture by Morten Jerven, a faculty member at Simon Fraser University’s School for International Studies. He has written a wonderful book, “Poor Numbers” which asks some very important questions.

Measure of the gross domestic product (GDP) of a country are important to understanding one country’s economic health as compared to another. We use these measure all the time to track relative differences between economies, and to figure out if countries’ economies are improving and degrading from year to year.

The measure is, of course, not without its problems. Gross Domestic product usually measures the sum total of the value of all market goods within a country at a particular time. For developed countries with established systems of taxation, this is not a difficult measure to produce.

Developing countries, however, particularly in Africa are quite bad at collecting taxes from their citizens, they often have opaque informal business sectors which dominate their economies and weak governments which don’t fund their census and statistical offices very well.

This is, of course, exactly the question that Jerven explores in his book. Given the rudimentary infrastructure of data collection and recording in developing countries, how do we know what we think we know about developing world economies?

Global funding agencies and governments make billion dollar decisions based on the recorded GDP of a particular country. Yet, it’s astounding that few of these agencies or anyone else who uses these measures often never asks whether the numbers are valid.

Three years ago, Ghana’s GDP doubled in one day, due to a change in the way that the GDP was calculated. Ghana went from being a developing country, to a low middle income country in one day. This year, Nigeria is also going to revise how it calculates its GDP. We expect that Nigeria’s GDP will rise considerably over night.

These measures matter. The World Bank considers concessionary loans on the basis of the GDP. If a country has too much money, it no long qualifies for special lending terms. This is a serious issue for countries that want to embark on development projects, or, in the case of resource economies (which most developing countries are), weather rapid fluctuations in market prices.

There are three major sources of GDP measures. The World Bank’s Development Indicators, the Maddison Project, and the Penn World Tables.

Though ranking is interesting, I was interested to see if the measure agreed with one another over time. If we were to measure economic growth of, say, Liberia over time, even if the basic dollar measures did not agree, the change from year to year might. For math people, the intercept might differ between two lines, but the slope might be the same.

Lacking time, I could only download two of the tables, the World Bank’s and Maddison’s. I wrote a script that would extract all of the GDP measure for each country from 1960 until 2012. I then compared the two measures by calculating the correlation coefficient for each country’s series.

I found that most of the country’s series agreed, with correlation coefficients in the .85 to .99 range. However, there were some glaring exceptions. The map to the right shows correlations coefficients for each country, colored by level. Tanzania stick out prominently, as does Namibia, the Central Africa Republic and Sierre Leone. Some of them are even in the negatives.

The political mess that is the CAR does not surprise me at all. Tanzania with its mostly righteous government and wealthy Namibia do surprise me very much.

I will have to explore this further, but until then, the take home message is that not all measures are created equal. 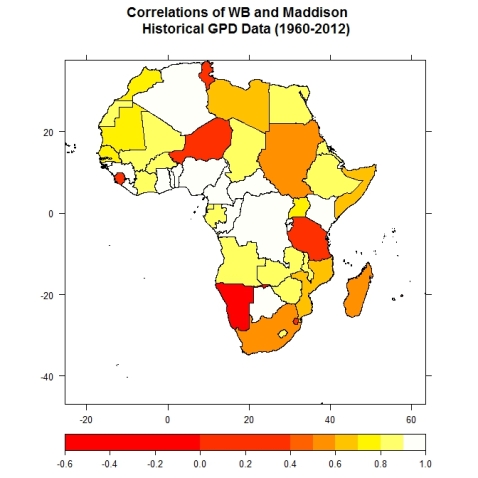