The Science of Metal 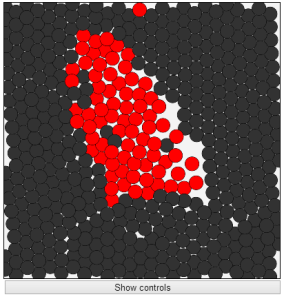 Saturday, I got my metal fix by checking out High on Fire and Anthrax in Detroit. A great show, to be sure (though HoF’s Matt Pike looks a little pregnant).

I was watching the mosh pit and thinking about two things. First, that mosh pits act like particle interactions. Bodies bounce off one another, and occasionally off innocent bystanders. Second, that pits tend to tire out as the night moves on, and fade out as more as the music gets more interesting.

To my surprise, a group at Cornell already ran with the first idea (why am I always late to the game?). They took an agent based approach, and modelled the mosh pit as particles that move and bounce off one another and are constrained by non-moshers around them. They even went to the trouble of creating a simulator!

Of course, I find out now that the national news even featured their work (so I admit, my observation may have been influenced by an article I don’t consciously remember reading in the past few weeks).

I like their model and it may have agreed well with mosh pits in reality, but it fails when crowds are small. Moshers in the simulator are allowed to leave the boundaries of the floor, where in reality they are constrained to the space they occupy. The model here assumes that there are sufficient non-moshers to constrain the mosher movements. Often, this is not true. Importantly, it appears to model the particles as having random movement (though there is a limited “flock” feature), when mosh pits are anything but random. Moshers tend to be attracted to other moshers.

As for the second, point, that moshers tend to run out of steam early and take frequent breaks, I’ll leave that to debate. I would like to consider how musical complexity and “interestingness” influence mosh pits. Moshers tend to care little for whatever they mosh to (could be Justing Bieber in the end), though better music might command more attention.

For the record, I’m too old to mosh.