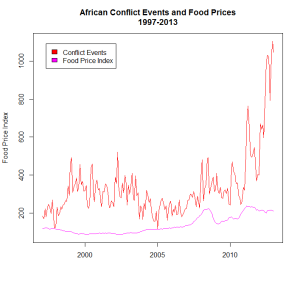 I decided I’d continue on this theme of African conflict for a bit after noticing some interesting trends in the data.

I’ve written before on the link between unrest in South Africa and the problem of rising food prices. Looking at the plot of the right, it’s not hard to notice the similarities in the series of conflict events post 2005 to food prices as estimated by the FAO’s Food Price Index (FPI).

I began to wonder whether some of the recent rise in conflict events is somehow related to rising food commodity prices. Having found a correlation in South Africa, it’s not out of the realm of possibility.

I calculated the cross correlations between the FPI and conflict events and found that the FPI was predictive of conflict, but that conflict was not predictive of FPI. This was similar to what I found in South Africa.

Plotting the FPI against the number of monthly conflict events, I found something interesting. It appears that the two are mostly unrelated until the FPI reaches a threshold of approximately 200, then the number of monthly events shoots up. It is interesting to note that in other research, 210 was the assumed maximum price that households would absorb before taking to the streets.

I’ve repeatedly written on the problem of stock market speculation in food commodities as a cause for rising volatility in world food prices. I won’t beat this into the ground again. However, results such as these indicate that the problem of rising and volatile food prices is not just an economic problem, but also a problem of human health and welfare.

FPI and Monthly Events with Threshold 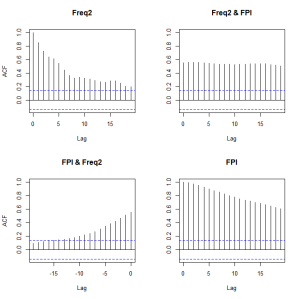