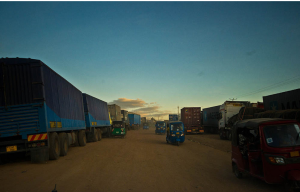 Taken near Tunduma. Trucks carrying goods to and from the DRC.

Unfortunately, I’m in the throes of dissertating, an agonizing process, a hazing experiment or some Kafka-esque series of trials to be maneuvered to an obscure and uncertain end.

I had a few minutes today to read the new Economist, which turned into more than a few minutes when I noticed an excellent feature on Africa’s economic rise. These features are not rare for the Economist, however. Reporting on Africa in that “newspaper” (as they refer to the themselves) is generally quite good. Perhaps it has something to do with being a magazine published in a former colonial power.

The Economist doesn’t make the names of the reporters easily known. The journalist in question, however, embarked on a whirlwind tour of the best of Africa, starting in South Africa, worming his way up through Zimbabwe, Zambia, Tanzania, Kenya, Ethiopia, over North Africa, then down through Ghana and West Africa.

As a testament to Africa’s development, he notes:

The journey covered some 15,800 miles (25,400km) on rivers, railways and roads, almost all of them paved and open for business. Not once was your correspondent asked for a bribe along the way, though a few drivers may have given small gratuities to policemen. The trip took 112 days, and on all but nine of them e-mail by smartphone was available. It was rarely dangerous or difficult. Borders were easily crossed and visas could be had for a few dollars on the spot or within a day in the nearest capital. By contrast, in 2001, when Paul Theroux researched his epic travel book, “Dark Star Safari: Overland from Cairo to Cape Town”, he was shot at, forced into detours and subjected to endless discomforts.

Which is totally in line with my own experiences, though he downplays the hazards of highway travel presented by the numerous poorly conditioned fourth hand vehicles all over the roads (road accidents may be killing more people than HIV in 2013). We can forgive at least that, I guess.

Of interest was this, however:

On a journey of nearly 600 miles across the country from Dar es Salaam, the commercial capital, to the Zambian border, the phone signal never falters, and every town has mobile broadband internet. Had there been a hotel in Tunduma, the border village, it could have been booked online. But the only place available is a sticky room with a broken television, welded into a metal case to thwart thieves.

I’ve done that drive, and been to Tunduma. If he would have bothered to write, I could have recommended a wonderful hotel nearby (complete with surreal cement safari sculptures) that certainly can be booked on line. The TV’s work and even have CNN and Bloomberg News.