A Visit to the Local Witch Doctor

The Healer holding a diarrhea medication and wearing a medicinal herb which alleviates joint pain.

I’ve seen survey after survey which show that a large percentage of Africans rely on traditional healers (witch doctors, medicine men) as a first choice when symptoms of disease appear. It’s pretty easy to dismiss them outright, but they have to be taken somewhat seriously when so many people rely on them for help.

My friend, Gabriel, though, knowing I’m into weirdness, took me to one tonight. By sheer coincidence, we happened to run into him on the way walking with a young gentleman. After a brief exchange, he was kind enough to agree to see us and led us back to his house.

Through Gabriel (my Luo is beyond poor), I asked him what the young man was doing there. The healer told me that someone had stolen some items from the guy. He had come to the healer to ask him to use his magic to reveal the identity of the thief and purchase some medicine with with to curse the man who had stolen his property. I asked him if people came to him often with such troubles. He replied that yes, indeed, many people do.

I tried to be snide and ask him what he would do if the thief came to him to try and get the curse removed and put on the guy that cursed him (fueling a never ending cyclic hell of cursing), but he didn’t really get what I was after.

The healer then turned to me and asked me what my troubles were. I tried to tell him my knee hurts (which it does), but he kept insisting that my stomach hurt (it does not). Finally, I had to cave and just tell him that I was suffering from stomach pain. When he was describing the pain, he kindly tried to include the knees.

The healer learned his trade from his parents. He claims that his particular magic is strong because he learned it from his mother (rather than his father). I was told that that was a secret but I guess I’ve let it out. I’m sure it’s still a secret here. (My readership numbers show that it’s a secret anyway.)

He took us back to his house, a shack in a fishing compound on the edge of town, which usually smells of weed. He took us inside and had us sit down on his couch while he started pulling out various bottles and bags of powders. I was sitting next to him. Suddenly he jumped up and insisted that the medicines wanted me to move to the far side of the couch. I asked him if the medicines talked to him to which he replied yes, indeed, they do. I figured out pretty quickly that he’s half deaf and wanted Gabriel closer to him so he could hear. 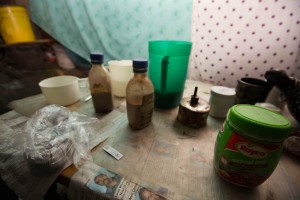 He went about mixing up some medications. The first was a small amount of powder that I thought was going to cure my alleged stomach problems, but instead was intended to get me a job. In fact, this medicine is so powerful, that I will never get fired from the job once I get it. I guess this means I’ll get a tenured faculty position any day now.

Next, he produced a number of bags of what looked like Indian spices and proceed to mix a heaping amount of what could be easily mistaken for garam masala. This medicine is what’s supposed to cure my diarrheal ills (which he also insisted I had). He poured some in my hand and told me to taste some. I hesitated but did it anyway. Definitely chili peppers in there. My mouth immediately went numb and my head started to spin a bit. Could be something like kava, definitely not weed. I have no clue what’s in this stuff, but there’s most certainly some active ingredient in it. I suspect that he produces it to emphasize his powers. 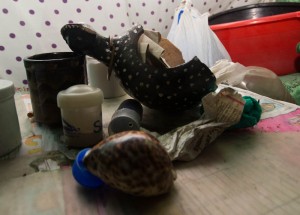 He gave me very specific instructions on how to mix it, and when to use it. I am only supposed to use it between the hours of 8 and 9 p.m. All of my diarrhea and abdominal pains will immediately disappear. I am to go back to see him after two days (presumably to buy more).

Finally, he recognized that my knee hurts. He asked me if I had time to wait. I said yes, and he left the house to go and get some herbs. We could hear him pounding it into a powder outside. He returned, and said that I should mix the power with Vaseline and cover my entire body with it. I would need a partner to do it. After covering my entire body with the vaseline/powdered grass mixture, I should shake my limbs a bit. After two days, all of my pain would cease. I was to see him again (and again buy more, presumably).

Eventually, we had to go. Patients were lined up outside waiting.

The Healer with patients

The Healer with patients

The herb that will alleviate my knee pain

The Healer holding a diarrhea medication and wearing a medicinal herb which alleviates joint pain.

74 responses to “A Visit to the Local Witch Doctor”