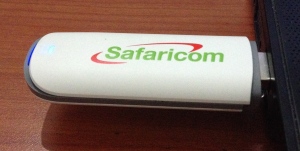 It might seem pretty absurd to be complaining about internet service in an area where most people are pretty happy just feeding themselves, but if you got out here, you would, too. Kenyans in my situation would complain, too. The awful service here at the guest house finally motivated me to act.

Just about everyone has a cel phone in Africa at this point. I think that the only people that don’t are elderly, and even only a small minority of them don’t have phones. In a part of the world where one’s most prized possession is family and friends, it’s pretty much a given to have a cel phone now.

Here, cel minutes are about as necessary as water. Families work and grow food in order to raise money to purchase cel minutes, even if it means that their children will be malnourished. No price is too high for keeping in touch with people in the social network, since one lives and dies by who one knows. The business of cel minutes creates jobs and attracts entrepreneurs, so the situation can’t be seen as all bad.

Now, you can even do your banking through the cel network using M-Pesa, which covers most of East Africa at this point. You can save money without worrying about getting everything stolen, which is really helpful if you are trying to squirrel away money to start or expand a business. You can make purchases with it. You can send money to friends and family.

If you have family overseas, they can send money cheaply and safely through the M-Pesa system. You don’t have to worry about getting robbed on the way out of the western Union office since your money is on the cel network and not in your hand. M-Pesa even supports micro-financing. Customers can receive and pay loans, with no hassle. M-Pesa is one of currently the most advanced mobile banking system in the developing world.

All types of cel phones are for sale, NOKIA being the most popular (the unmmistakable NOKIA ring tone should become Africa’s continental anthem). The shops widely stock smart phone and BlackBerry style phones. There are cheaper phones out there, of course, usually sitting sadly on the bottom shelf.

A decent phone with cel service, texting capability, GPS, and 3G internet service will run you about $30-$100. The good ones even have a dedicated Facebook button (everybody here is on Facebook). You can then buy SIM cards for the backbreaking price of $1.00 and phone minutes for a penny each. There are no screwed up contracts, no extra fees, no bills and no surprises. Everything is prepaid.

I can get 3G access in just about every part of East Africa. Coverage is actually better than and service superior to GDP giant, the United States of America.

And this leads to today. I bought a 3G USB internet stick for the incredible price of $15, and data time for a penny a meg, which is about what I pay in the States. I can use it all over the continent. If I buy a SIM card, I can use it in Japan and Europe. In fact, it seems like I can use this thing everywhere but the United States.

The process of buying the stick was pretty much horribly painful, since the lady at the store didn’t seem to know much about it, but eventually I got it. A new government policy of registration had me making several calls to SafariCom to register the thing, but 3 hours later, it got done.

The long and short of the story is that the US is embarrassingly behind when it comes to cel services. In the States, the stick would have cost me nearly $250 for the same brand and almost the same model, I’d be locked into a medieval contract scheme, and get slapped with overage fees and inexplicable charges on a monthly basis. To make matters worse, I could only use the thing in about 20% of the country, if at all.

The M-Pesa system allows a way of money transfer without the use of cash, unbelievable archaic checks or third party credit cards which levy huge fees on transactions. It’s a system that’s far superior to the patchwork of antiquated and big brother laden money systems that hobble the American economy. Sitting here in poor Kenya, America’s system of money payment is starting to look entirely backwards.

But I have my internet stick, a new phone SIM, and even found out that I can send money back to Kenya for research projects. Life is a little bit easier now, even way out here in the sticks. Amazing.