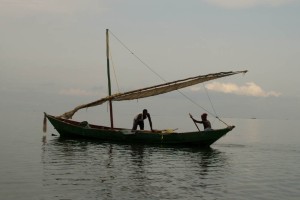 Lake Victoria is a rich source of Nile Perch and Tilapia. Both fish are recent introductions to the lake. The Nile Perch, as a top predator, is associated with extensive ecological damage to the Lake’s ecosystem. Extensive fishing of the Nile Perch has led to a decrease in size, and the comeback of several types of local fish fauna.

Where the fish may bring as much as $20 a kilo in giants such as Whole Foods, a local fisherman can expect approximately $1.00, but the price is set by the world market and also subject to the whims of dealers. Without a union, fishermen have little means to negotiate prices.

As the lure of quick and plentiful cash is hard to resist, local fisherman have abandoned traditional fishing practices to enter the cash economy. This, of course, in itself is not a bad thing, but the money often gets spent on alcohol and prostitutes, rather than school and health fees for children. The nutritional profile of Lake communities suffers, and children are malnourished in an area that brings nearly $500 million dollars in revenue to Kenya.

Worse yet, ready cash creates a new market for sex work and positions are easily filled by poor women from the rural areas with no other options. The result is that the fish trade, and its destabilizing effect on families, is fueling HIV transmission here. Up 40% of people in any community along Lake Victoria may be HIV positive.

The trade has brought people from the inland areas to Lake Victoria, which has led to displacement of indigenous populations. Displacement has serious implications for security and livelihoods but in this area of intense malaria transmission, displacement and encroachment both impacts human health. The movement of populations has changed the genetic profile of local communities. Millennia of interactions between locals and parasite had led to at least some minimal level of genetic balance, which may have been disrupted by the introduction of new humans not acclimated to local strains of the parasite which causes malaria. This present added risks of serious disease.

Now, anyone who reads this blog knows that I am pro-economic development, pro-market and see no merit in suggesting that developing countries uselessly stick to old, antiquated and oppressive ways. No matter how nostalgic we may be for an idyllic past that may or may not have ever existed, the reality is that economic development in many cultural contexts has extended human life expectancy, reduced infant mortality, freed women to not be treated as cattle and reduced the subjugation of social minorities. But being pro-development means that one must support, err, development, which is only occurring slowly here.

The fishing communities suffer for a number of macro level factors.

All of these things, however, are challenges that all developing countries are facing. The economy along Lake Victoria is hardly an exception, but the mechanism are at least somewhat more obvious.