Ben Bernanke Comes to the University of Michigan 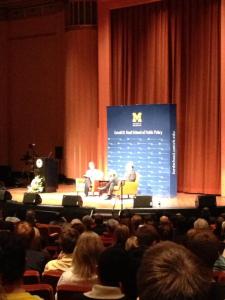 Ben Bernanke, Chairman of the Federal Reserve, came and spoke at the University of Michigan today. Of course, I make sure never to miss an opportunity to check out high ranking government offices ask when they come and speak.

Bernanke addressed what one would expect, fiscal cliff issues, the debt ceiling and the role of the Federal Reserve itself.

The fiscal cliff: He started by reiterating the position that Obama took at his noon press conference. Namely, that Congress has no choice but to approve a raise of the debt ceiling as it has nothing to do with future spending, but rather covers spending that has already been approved by Congress. To not approve an increase in the debt ceiling would lead the US to default of its financial obligations and create chaos in the world economy.

This is, of course, completely true. People are basically suggesting that the government should save money by not paying the light bill. Shutting down the government may sound like a revolutionary affair, but the results would be disastrous, and as the interest on these bills would continue to accrue, we’d just end up losing money in the end.

The role of government in mitigating financial disasters: Bernanke discussed parallels of monetary policy between the Great Depression and the Great Recession, pointing out that efforts to reign in the depression were too cautious and conservative. Government may not do very well in times where the markets do well (since it doesn’t really have to do anything), but has much to do during a financial crisis.

Though a personal observation, the response to the Great Recession was far too conservative. We needed more stimulus, not less and the notoriously slow reaction of The United States Congress held us back in the end. Petty bickering and political brinksmanship shot us in the foot. We’ve certainly seen economic growth since, but unemployment gains have been anemic.

Global economic issues: Though Americans seem to be under the mistaken impression that the united States lives in a bubble, the truth is that we live in an interconnected world. Though the US has seen comparatively impressive gains compared with the rest of the world since the crash, continued problems in Europe and slowed growth in the emerging economies has held us back.

I’m not sure how one gets around China’s slowing pace of growth. Some of that is the result of intentional policy changes to cool down exports in order to create a stronger domestic market there. The Europeans, at the very least, are working to create a unified central bank, which should help mitigate problems in the future. How all the individual political players work this out, will remain to be seen.

Move to require auditing of the Fed: He mentioned the recent movement by House Republicans to require full auditing of the Federal Reserve. Bernanke argued that the Fed is already subject to an independent private sector reviewer. The GAO is also able to examine the Fed’s books and evaluate the inner workings of the at agency. What the GAO cannot do is evaluate specific monetary policy of the Fed. The reason for this, is that the Fed is an independent agency and a unique private-public mixture. If the GAO, or any other government body were able to say, audit and evaluate the implications of raising or lowering interest rates, the Fed would then become less than independent and be subject to the short term political interests of Congress.

Given the batshit nature of this particular Congress, we can be assured that this would result in chaos for the world economy. For proof, one would consider the policy roots of the financial crisis itself. Governments are not incentivized to reign things in when people are profiting. A politically compromised Fed would be even less likely to attempt to control an asset bubble. I’m not sure where I stand on this issue, but an independent central bank is not unique. The Bank of Japan also operates outside the political sphere of the Diet.

I’m pretty sure House Republicans knew all too well that the Senate wouldn’t approve the Bill. They had nothing to lose by signing it.

As Bernanke kept repeating, the “dual mandate” of the Fed is to manage price stability and maximize employment. It can be offered that the Fed, in fact, serves only the interest of the very wealthy. This may certainly be true. It has been my experience, however, that the intentions of policy makers are manifold and often what appears to be self-serving, is actually intended to serve the greater good. Knowing this, I tend to give policy makers the benefit of the doubt and at least listen to what they have to say (rather than have Ron Paul do all the talking for them).

I feel that Bernanke is no exception. I am definitely not stating that I trust him implicitly, or that I think that the policies of the Fed, or any other economic policy, are flawless. On the contrary, the brunt of the financial crisis can be attributed to poor policy making. However, it is irresponsible to disregard agencies such as the Federal Reserve. But it’s worthwhile to hear a man out.