Defense Spending and the Economy: Is there a link? 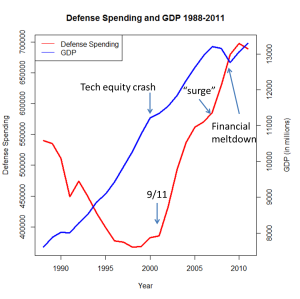 Today I encountered a discussion, where the participants emphatically maintained that the current US economic woes are to be blamed in part on increased US defense spending during the Iraq and Afghanistan wars. I countered and claimed that they have no relation at all. Of course, these people hate me now (thinking I was merely being difficult for the same of being difficult), but that’s ok. I’m used to it.

As I maintained, there is no obvious relationship between defense spending and economic growth. There are a couple of major blips in GDP growth, namely the collapsing of tech equities in the early 2000’s and the economic meltdown on 2007/8. There are no events in US GDP for drops during Clinton nor sudden increases in defense spending following 9/11.

Certainly, GDP is not the only economic marker we could use. I did the same thing with the unemployment rate.

Now, at first glance, this is a little more convincing. But when you take the events into consideration, it is less so. The two major economic events of the 2000’s, namely the equity bust, and the financial meltdown both resulted in sudden jumps in the unemployment rate. 9/11 and the troop surge did not. In fact, as spending was doing up, unemployment was going down. If we look back into the nineties, we can notice that even though defense spending was declining, unemployment was up, then down again. In short, given the context, there is no real reason to assume that two related.

I am NOT an advocate for war. I am though, an advocate for evidence backed claims. There is little evidence to suggest that increased defense expenditures during the Bush years affected our economy.

We can claim, if we like, that federal revenues might have been greater had the wars not happened. These revenues, it is argued, could have been allocated to education or infrastructure improvements, for example. However, it has to be noted that the wars weren’t funded out of federal revenues. They were funded out of low interest bonds. Thus, as those bonds had not been serviced at the time that this data was collected, there is, again, even less reason to assume that the wars negatively impacted the economy.

Now, we can certainly make arguments over how much defense spending is too much and what the potential long term effects of servicing the war debt will be. I argue, though, that our elected representatives are much more interested in financing the military than, say, welfare programs for the needy. It would take a great leap of faith to assume that, if the military were closed tomorrow, monies targeted for defense would automatically be transferred to providing health care to poor people. I also argue that, long term, the expenditures that came out of the financial crisis will be, in comparison, more difficult to service.

The war cost us politically, but was a bargain economically. To me, that’s a much more frightening state of affairs.