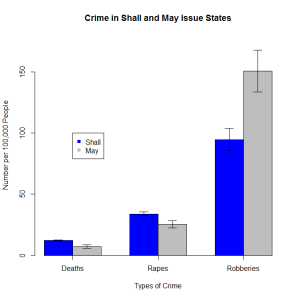 Crime Rates for Shall and May Issue States

It’s a question that everyone seems to know the answer to, and an oft repeated mantra of gun rightists everywhere. Myself, I’m always skeptical so I decided to find out for myself.

Without getting in the specifics, in the concealed carry world, there are four major classifications of states:

I assembled a dataset of CCW classifications, along with population adjusted firearm deaths, rapes and robberies. Crime is certainly about more than just gun laws. Thus, for controlling variables, I also included the percentage of people living in urban areas, percent African-American and the Gini coefficient, a measure of income inequality.

The results can be seen above. Shall issue states have more firearm deaths and rapes than may issue states, but fewer robberies. These differences were all statistically significant.

Again, crime is about more than just gun laws. It is also about urban and rural divides, income inequality and entrenched marginalization and poverty. Thus, in ran some regression models using the controlling variables for percent urban, percent African American, and income inequality as measured by the Gini. I also included an interaction term for percent African American and the Gini, as the two could synergistically alter the state crime profile.

I found that May Issue states still had fewer deaths and rapes than Shall Issue states. Stricter gun laws were actually the only significant variable in the model. For robbery, however, the difference between shall issue and may issue states went away when including the other variables.

What I concluded: I found that states with stricter gun laws have lower rates of violent crime. I also found that there is no association of gun laws with robberies, which are better explained by demographic variables associated with urbanicity and the social problems of a pluralistic, yet unequal, society.

We might conclude, then, that the answer to the question posed in the title of this post is NO: loose gun laws do not necessarily lead to lower rates of crime, contrary to what appears to be popularly believed.

I could run with this and state publicly that strict guns rules work. Believe me, I want to. I won’t for fear of being guilty of the same crime that gun proponents commit when throwing around “evidence.”

This simple analysis suffers from a problem endemic to discussions of policy. Namely, that the factors on the causal pathway between policy and human behavior are elusive and difficult to measure. It is difficult for me to state definitively that gun laws have anything to do with crime at all. I am not able to effectively connect the dots between implementation and change in crime patterns, while accounting for all of the other factors that may be simultaneously at play (social problems, economics, incarceration, etc.). The results certainly can lead one to certain conclusions, but my goal here is not to prove that gun laws work, but rather to show that the data don’t support the assertion that they don’t work.

Regardless, popular discussions act as if finding the links between gun policy and crime is a trivial affair, despite weak evidence and measurement. Others have noted the complexity of drawing conclusions on the subject. It is ironic to me, that some of the same people who may accept weak studies of the effect of gun policy on crime as hard fact and cherry pick results, are the same people who deny human induced climate change, for which there is ample, well documented, and solid support. This is a sad, sad state of affairs.