Guns and the Polite Society 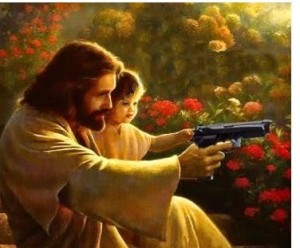 Not to beat the gun discussion into the ground, but I’m rejoicing that we’re having this discussion at all. It’s far, far overdue.

Firmin DeBrabander, Associate Professor of Philosophy at the Maryland Institute College of Art, had an interesting column today that summed up my feelings on the possession of guns in public:

Guns do communicate, after all, but in a way that is contrary to free speech aspirations: for, guns chasten speech. This becomes clear if only you pry a little more deeply into the N.R.A.’s logic behind an armed society. An armed society is polite, by their thinking, precisely because guns would compel everyone to tamp down eccentric behavior, and refrain from actions that might seem threatening. The suggestion is that guns liberally interspersed throughout society would cause us all to walk gingerly — not make any sudden, unexpected moves — and watch what we say, how we act, whom we might offend.

There’s a reason why we don’t speak frankly in front of police officers, and that silence is wholly undemocratic. I have always maintained that Americans, despite their image worldwide as brash, opinionated braggarts, are actually hemmed in by their great capacity to do violence to one another. Despite Japan’s image as a country of deference, in my experience, the Japanese are mostly frank with their opinions and happy to share, no matter how controversial the topic. Granted there are exceptions, but the trends are there. It worth mentioning that Japan is quite polite, even without personal arms.

I was imagining what a classroom would be like where the instructor openly carried a weapon. Would there be discussion? Would students feel compelled to speak their mind and contribute? I think not. It is for this reason, that guns have no place in the classroom, despite right wing calls for arming school principals with M4’s. Classrooms, particularly on college campus, are the essence of democracy. Classrooms are places for sharing ideas and mutual respect. The power dynamic produced by weaponry violates this basic facet of education. It should be pointed out, that the parties which scream the loudest for universal ownership of guns, spew the most vitrol against formal education.

Cass Sunstein, Professor of Law at Harvard University wrote a brief history of SCOTUS interpretations of the Second Amendment, arguing that the present one, namely that individuals have a Constitutional right to possess individual firearms, is a radical one, and without precedent in American history:

It is striking that before its 2008 decision in District of Columbia v. Heller, the Supreme Court had never held that the Second Amendment protects an individual right to have guns.

For almost seven decades, the court’s leading decision was U.S. v. Miller. The 1939 case involved a ban on the possession of a sawed-off shotgun. Sounding like Burger, the court unanimously said that the Second Amendment’s “obvious purpose” was “to assure the continuation and render possible the effectiveness of” the militia. Without evidence that the possession of a sawed-off shotgun was related to preservation of a well-regulated militia, the court refused to say that the Second Amendment protected the right to have such a weapon.

For decades, federal courts overwhelmingly rejected the conclusion that the Second Amendment protects an individual right. It wasn’t until the 21st century that lower federal courts, filled with appointees of Presidents Ronald Reagan and George H.W. Bush, started to adopt the individual-rights position. And, of course, the Supreme Court itself adopted that view in 2008, by a 5-to-4 vote.

In other words, the present commonly held interpretation flawed, and the result of a series of right wing SCOTUS appointments and a well funded disinformation campaign funded by the NRA and the gun industry. I have long suspected this. Though the Second Amendment clearly seeks to disrupt state monopolies on violence (tailored toward British rule), it takes a bit of gymnastics to believe that individuals are guaranteed the right to individual weaponry, when the Amendment itself refers to citizen militias in its preamble. Moreover, at least in my reading, there is nothing in the Second Amendment to suggest that states and localities can’t regulate individual ownership.

An article from the Economist today had the following to say regarding the necessity of guns to prevent tyranny:

As for the National Rifle Association bumper stickers arguing that only an armed citizenry can prevent tyranny, I wonder if that isn’t a form of narcissism, involving the belief that lone, heroic individuals will have the ability to identify tyranny as it descends, recognise it for what it is, and fight back. There is also the small matter that I don’t think America is remotely close to becoming a tyranny, and to suggest that it is is both irrational and a bit offensive to people who actually do live under tyrannical rule.

I couldn’t agree more. Americans scream and cry about the evils of government, but the reality is that the American system of elections runs mostly without problems. We can argue about whether the presence of money impedes the process of fairly electing representatives but compared with Robert Mugabe’s Zimbabwe, Putin’s Russia or even the one party state of China, we’re doing pretty damn good.