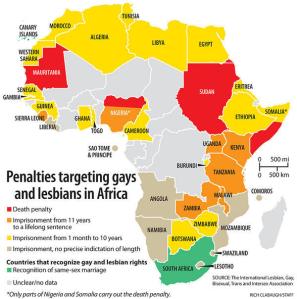 While public acceptance of homosexuality and gay rights is rapidly improving in the United States, the debate rages in Sub-Saharan Africa.

Uganda is now famous for the introduction of a bill which sought to criminalize homosexuality. Some offenders would be punished with death. Though the Amendment never got passed, American Evangelistic Christians were implicated in inspiring the bill, presumably feeling that the damage they do domestically isn’t enough.

Now, David Cecil, a UK born theater producer living in Kampala faces a two year prison sentence for the awful crime of putting on a play dealing with homosexual themes.

On 13 September, he was arrested in Kampala and held in detention for three days. Eventually released on bail, he now faces two years in jail or deportation on a charge of “disobeying lawful orders” after refusing to let the authorities suspend and review his play the River and the Mountain.

The play, which tells the story of a successful gay businessman who is murdered by his employees when he comes out, was always likely to cause controversy in Uganda.

Issues of homosexuality in Sub-Saharan Africa are as fascinating as they are repulsive. From the story of Tiwonge Chimbalanga and Steven Monjeza, the two men who attempted to marry in Malawi and were sentenced to 14 years in prison (they were later freed) to the horrible death of David Kato, a Ugandan gay rights activist who was publicly outed and bludgeoned to death in his home, the debate over gay rights in Africa as as contentious as it is dangerous.

Nearly all SSA countries have some law criminalizing homosexuality. Many of these laws are left over from the old colonial governments. The Brits have moved on, but have left their an awful, awful legacy. Now, ironically, the debate centers around what some people see as a heavy handed attempt by western countries to impose a dangerous morality.

Of course, I am always shocked to hear people rage about the damage homosexuality causes in SSA, while the HIV epidemic, fueled by heterosexual sex devastates the continent. Politicians, of course, have little to lose by alienating a small and defenseless population. Screaming about condom use, concurrent sexual relationships and prostitution might cost votes.