This gem fortunately hadn’t succumbed to CDR rot quite yet. It’s me and Ed Wilcox of Temple of Bon Matin jamming out at the BULB Clubhouse in Providence, RI somewhere around the year 2000. Ed would drive up from Philly to play poorly attended shows and we loved having him.

Ed’s one of the greatest and most unknown of all psych drummers and an all around great guy.

One time he brought Mikey Wild up, and I think we took a few minutes out and laid this one down.

Barack Obama: Have You Forgotten the Poor? 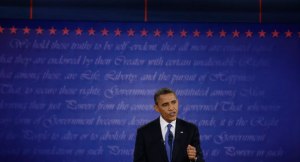 Clearly, he has. The only references to the poor in last night’s debate were over some issues of Medicaid spending.

Romney, of course, argued that the States should take care of it like Massachusetts has, ignoring the fact that most states have nowhere near the income distribution that Massachusetts has. Not to mention, that states like Mississippi have repeatedly shown that they can’t be trusted to handle matters of poverty.

Barack Obama now avoids the topic of the poor, which, ironically, is what brought him to politics in the first place. Rational, adult conversations of widening income inequality are nearly impossible in this political climate which cynicaly divides Americans into “makers” and “takers.” Barack Obama, recognizing political realities, has very unfortunately gone from a champion of the poor, to merely dancing around this subject in an accounting book sort of fashion.

The fact is that income inequality is the highest its been in decades. Educational opportunities are scant, as states hollow out education budgets and college tuition rapidly increases. Education is becoming increasingly segregated, thereby limiting the opportunities for the next generation of Americans even further. Beyond racial/ethnic segregation, the poor and the wealthy are being geographically split, as services automate and jobs move to cheaper areas of the world, the wealthy have less and less need for the poor, wages fall, contributions to services fall and poverty becomes more entrenched.

Right wingers rightly point to entrepreneurship as a (among many) solution to urban poverty, though ignore the fact that a lack of educational opportunities impedes the ability for the poor to succeed. Nearly half of all Detroiters are illiterate. More salient, as in the developing world, access to capital prevents entrepreneurship. A payday loan place may front you $100 to pay the heat bill (at 390% interest), but won’t loan you money to start a business. With assets totally less than $5,000 last year, urban African Americans have little to borrow on. It doesn’t appear that any politician has the political will to solve this dilemma.

In 2012, the only time it is acceptable to talk of the poor, is when we denounce them. Unfortunately, Mr. Obama has sheepishly caved to this standard. I hope that, after he is reelected and has little to lose, that the conversation may shift back to the poor, who arguably lost the most in the economic meltdown. I hope that the conversation may, for the first time, include the problems of the poor even outside the United States, who have long been completely absent from this current administration’s goals. George W. Bush talked of world poverty more than Barack Obama and to me, that’s a horribly sad state of affairs.