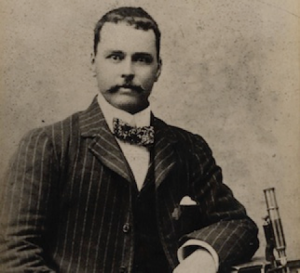 Malaria has been around a lot longer than that, but 115 years ago, on August 20, 1897, Dr. Ronald Ross definitely proved his hypothesis that Anopheles mosquitoes transmit malaria to humans.

Ross himself called the day “Mosquito Day,” an anniversary international health professionals (particularly the London School of Tropical Medicine and Hygiene) continue to celebrate. Certainly, if Dr. Ross had not found parasites during his dissection of mosquitoes, someone else would have. Dr. Ross, though, can be credited with speeding up the process of malaria elimination efforts, perhaps saving the lives of billions of children.

Though the discovery of Plasmodium parasites in the gut of Anopheline mosquitoes was vastly important, Dr. Ross most important contribution was his word on mathematical models of infectious disease transmission, which continue to push research to this day.

Though malaria was eventually eliminated from the US, Europe, Japan and a host of other countries following World War II, it continues to kill children throughout most of the developing world. Nearly half the world’s population, 3.3 billion people, lives at some risk for malaria and nearly one million people die from the disease every year.

We still have much work to do, even 115 years later.

An amazing excerpt from his 1923 notebook where he recalls that very important day:

“…The 20 August 1897—the anniversary of which I always call Mosquito Day – was, I think, a cloudy, dull, hot day. I went to hospital at 7am, examined my patients and attended to official correspondence… After a hurried breakfast at the Mess I returned to dissect the cadaver (Mosquito 36) but found nothing new in it… At about 1pm I determined to sacrifice the seventh Anopheles (A. stephensi) of the batch fed on the 16th, Mosquito 38, although my eyesight was already fatigued. Only one more of the batch remained.

The dissection was excellent and I went carefully through the tissues, now so familiar to me, searching every micron with the same passion and care as one would search some vast palace for a little hidden treasure. Nothing. No, these new mosquitoes also were going to be a failure: there was something wrong with the theory. But the stomach tissue still remained to be examined – lying there, empty and flaccid, before me on the glass slide, a great white expanse of cells like a large courtyard of flagstones, each one of which must be scrutinised—half an hour’s labour at least. I was tired and what was the use? But the Angel of Fate fortunately laid his hand on my head; and I had scarcely commenced the search again when I saw a clear and almost perfectly circular outline before me of about 12 microns in diameter. The outline was much too sharp, the cell too small to be an ordinary stomach- cell of a mosquito. I looked a little further. Here was another, and another exactly similar cell.

The afternoon was very hot and overcast; and I remember opening the diaphragm of the sub-stage condenser of the microscope to admit more light and then changing the focus. In each of these cells there was a cluster of small granules, black as jet and exactly like the black pigment granules of the Plasmodium crescents… I laughed, and shouted for the Hospital Assistant – he was away having his siesta… Then I made rough drawings of nine of the cells on page 107 of my notebook, scribbled my notes, sealed my specimens, went home to tea (about 3 p.m.) and slept solidly for an hour…”