The Price of Sex in Developing Countries 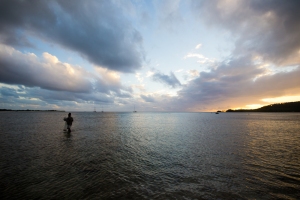 During my recent trip to Vanuatu, I had an interesting conversation with the single worker at the local health clinic on Aneityum, a small island of approximately 700 people. He noted a recent and disturbing rise in sexually transmitted infections (STIs) among the islanders.

The small village of Anelcauhat has a population of approximately 400 people. Out of those 400, approximately 200 (or more) are thought to be sexually active. He reported that he has seen more than 50 symptomatic STI cases in the past 6 months, a shocking number, particularly when one considers that an estimated 70% of all bacterial STI infections are asymptomatic.

The reasons for this are unclear though Aneityum has a long relationship with STIs. In the early 19th century, the population of Aneityum was more than 12,000 (depending on who you ask or believe). By the early 20th century the population had been reduced to a mere 200 people, in part because of a sudden drop in fertility. Gonorrhea and syphilis had rendered the entire female population infertile.

In Vanuatu, like many developing countries, more than 50% of the population is under 24. Youth is a major determinant of risky sex everywhere. A lack of educational resources for youth and low knowledge of STI prevention practices exacerbate the problem and increase risk for everyone. Worse yet, traditional structures make discussion of sexual issues taboo, and male community leaders have been known to discourage condom promotion, thinking that it promotes sex (sound familiar?).

Culture enables increased STI risk. Partnerships in developing countries are often difficult to assess. In some areas of Sub-Saharan Africa, despite the presence of strong religious groups, multiple concurrent relationships are the norm. Concurrent partnerships have long been shown to be a major driver in the HIV epidemic. In Aneityum, formal polygamy does not exist, but any man may have many “Custom Wives” in the community, a connection that must certainly come with extracurricular benefits though people are incredibly vague on the subject.

The shift to cash based economies is fueling STI transmission. Vanuatu, like all developing countries is experiencing not only a population boom, but also an urbanization boom as young people increasingly move to urban areas for jobs, social and economic opportunities. This crates disconnected populations, who often negotiate social connections through romantic partnerships, free of their local watchdogs.

Gender inequality places everyone at risk. Cash wielding older men readily take younger women under their wing, exposing young women to STIs of an older generation. Formal prostitution flourishes where men increasingly have ready cash, and a supply of disconnected, unemployed women rises. No 16 year old girl wants to be a village prostitute where everyone knows her family.

Truthfully, noone knows what the future holds. The fact is, though, that around the world, STIs are diseases of the poor and particularly do well in areas where access to health care is scant. I worry for an area like Aneityum. Clearly, all of the mechanisms to transmit STIs are there. If HIV hits their shores, the entire community would be ripped apart.