Today I went with one of the survey teams to Sucru, a tiny island of about 200 people on Lake Victoria.

Like other islands, the people make their living almost entirely through fishing. Small scale fisherman capture Nile Perch, Tilapia and catfish, bring them back to community fishing boards, which then sell them to larger brokers, which then take them to the notorious (and mysterious) “factory.” The “factory” then filets the fish and sells them to European and American dealers. The welfare of this tiny island depends entirely on the whims of hungry Europeans. The global economy starts on islands like Sucru.

In contrast with the other islands, however, the locals appear to eat some of what they catch. In fact, I assume that the majority of what they eat comes straight from the water. I could see absolutely no evidence of agriculture of any kind on this tiny island. The result is that the residents of the island appear quite well fed, some are even fat, but clearly lack essential vitamins due to their monotonous diet.

Housing conditions are miserable, and, like many islands here, sanitation is quite poor. About twenty years ago, a group came and installed a septic and well system to try to keep the locals from openly defecating and drinking their own sewage, but the system appears to have never been used. Like most areas around Lake Victoria, people prefer to crap in the bushes over a formal toilet. The result is that diarrheal disease is constant, and children live in states of vastly poor health. 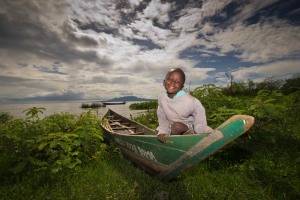 As far as I could tell, school age children have to stay with relatives on the mainland in order to get an education. Healthwise, they might fare better in school.

Though only having a handful of residents, malaria is endemic to the island. Black mambas (considered the most dangerous snake in the world) are also native and live in plentiful numbers. We found a freshly killed one on a rock.

Safari ants are also plentiful. A few crawled up my pant leg and drew blood. I can be seen in one of the pictures picking them off myself. I think everyone had their pants off at some point picking off ants.

Despite all the challenges, the locals are incredibly kind (like many people around the lake), appear quite happy and don’t mind being photographed. They laugh hysterically at my rudimentary (though improving) command of the Luo language.