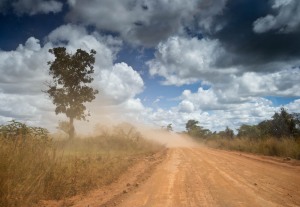 It takes more than 20 hours to get from the eastern coast to the western end of Tanzania. Though the road is largely paved between Dar es Salaam and Mbeya in Rukwa Region, areas in more remote sections of Tanzania are what one would expect: hills, rain swept crags and valleys, and treacherous mountain paths. Compounding this distance is the multitude of police stops along the way.

So far, we’ve had to pay fines for “speeding” and not having a sticker that no one seems to have heard of-though I suspect that it’s a permit for carrying white people in the country of Tanzania. As I’m writing this, we’ve just been stopped for doing 40 in a 30 zone, which set the driver back about $10. In total, we’ve been stopped more than 10 times and I don’t expect it to end anytime soon. I’m reminiscing about driving through Tennessee, where cops will pull over anyone with an out of state tag and concoct any number of fine-able “offenses.” No one asks specifically for a bribe, but it’s pretty clear that the police are pocketing the “fines.”

This is the main artery that connects the ports of Dar with Malawi, Zambia and the DRC. Back to back trucks take goods in and out of Tanzania all day long. Gasoline and diesel appear to be the most transported items, followed by Coke and Pepsi bottles both empty and full. Trucks carrying farming and construction equipment are not rare. It’s reassuring to see flatbeds carrying brand new Massey tractors toward Malawi and Zambia.

It’s the harvest right now, so farmers are busy bagging rice and loading them on to large trucks for consumption in other areas of Tanzania, and presumably for export to other countries. This area is famous for rice, and I can attest to the quality. Wood is also in plentiful supply. Trucks full of African mahogany that would bring hundreds of thousands of dollars in the US are to be seen everywhere.

We pass through Tunduma, on the Zambia/Malawi/Tanzania border. The air here in this border town is thick and black with exhaust. Its remnants coat everything in sight, even the humans, leaving it a dull and dirty brown. If I were to spend any more time here, I’m sure my lungs would begin to hurt. Looking around at all the auto parts shops, it’s probably the best place in this region to go if you’re looking for parts for your Scania truck, presumable scavenged from the series of metal husks that adorn the sides of the road. Most are half buried from the rains.

Just got pulled over again, this time for a hanging cooling belt. This time, we don’t have to pay. While we’re all thankful to know that the cooling belt needs to be replaced, the driver remarks that this road is notorious. What should be an 8-hour trip from Mbeya to Dar turns into twelve due to all of the pointless police stops.

The drive on the way back is a harrowing series of mountain paths and thin highways. Cows, goats, baboons and children present constant hazards. By far, though, the most dangerous parts of the road here are the vehicles. Even the largest of trucks run long past their date of expiration. It isn’t at all reassuring to remember that the number one reason that people decommission their vehicles is the expense of repairing worn brake lines. Engines can be replaced. Safety is another matter entirely.

We see the remains of not one, but several horrific truck accidents. Even if the drivers survived the crash, it’s unlikely that any hospital in Tanzania would be equipped to provide adequate care to manage massive blood loss and trauma. Honestly, I wouldn’t want a transfusion here anyway. It is notable that as we approach Dar and the road widens, the number of accidents appears to dwindle. I become more and more at ease the closer we get. I have to admit, though, my worries are likely overblown and unwarranted, but it never hurts to be careful.