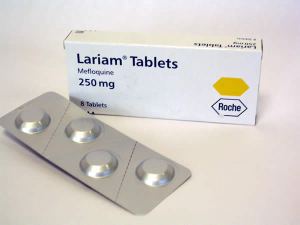 Recently, U.S. Army Staff Sgt. Robert Bales left base in the middle of the night and allegedly killed 17 Afghan civilians (including children) in cold blood and wounded 6 others. Since then, the media has blamed multiple deployments, stress, a history of violence and alcohol consumption as contributing to the horrific killings. One possible cause I hadn’t considered (but should have) is the prescription of mefloquine (Lariam), assuming that the military is still prescribing it. If the press it to be believed, the military is still using it.

Psychotic episodes on Lariam are not uncommon. Reports go deep within the drug’s history (which is an interesting one), and problems have even been noted in military contexts. It was reported that Larium may have caused four military men to kill their wives in the summer of 2008. Killings in the UK in 2002 were also associated with Lariam. Even veterans groups have come out against the drug.

The NIH even notes that side effects of Lariam use include: “nervousness or extreme worry, depression, changes in mood, panic attack, forgetfulness, confusion, hallucinations (seeing things or hearing voices that do not exist), violent behavior, losing touch with reality, feeling that others want to harm you, thoughts of hurting or killing yourself.” They also note that these are rare events. However, as we in epidemiology know, rare events tend to occur more when larger numbers of people are at risk. If there is even a .1% chance of something happening, then likely, given 1000 people, there will be one event. More than 100,000 military members have gone to Afghanistan. Do the math.

Military deployments are characterized by stress, long periods of sleeplessness, a culture that rewards violence and the propensity for violence, and social hierarchy that leads to imbalance power differentials in interpersonal relationships. All of these things likely aggravate potential negative side effects of Larium.

It is perplexing that the military would still be using Lariam. The risks are well known to the military, who have been reported to overprescribe it to inmates at Guantanamo, likely as a form of torture. It is likely, that the daily schedule of the more benign (and effective) Malarone are prohibitive in extended combat missions.

Some researchers, noting the evidence of psychotic episodes and death associated with Lariam, also point to political and economic corruption as being the reason Lariam continues to be used. Interestingly, Lariam was unethically tested on American prisoners in the 1970’s, where negative effects were noted even then. The US military needs to reassess its malaria policy (as it appears to have done) and ask itself if the risks to civilians, both foreign and domestic, are worth the low cost and convenient dosage regimine. Reports have indicated, though, that the military is set to drop Lariam from its list of drugs. Whether this has happened yet, is unclear at this point.

Personally, I would never take Lariam. I would rather risk getting malaria, than take it. Even the more moderate Malarone, reportedly free of side effects, induces severe depression in me (in addition to my normal depression), to the point where I have to stop taking it.

Lariam does not get Sgt. Bales off the hook. My fear is that Sgt. Bales defense and war apologists may use the Lariam issue as a convenient defense. The fact is that he killed 17 civilians who all have names and people who love and miss them.