Burn My Passport: Citizenship in the 21st Century 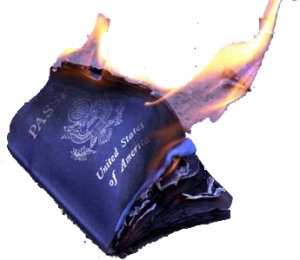 My US passport sits on my desk, along with two other ratted and expired versions of it. I often think of citizenship. Mostly, I think of how absolutely meaningless it is and about the ridiculous restrictions imposed by it.

For example, my passport is blue and has the seal of the United States of America on it. With this document, I can enter most countries around the world visa-free and return to the US at will for as long as I hold this document. Malawians, though, cannot travel to most countries without securing travel visas ahead of time, often at great expense. Passports not only restrict entry, they also restrict exit. Even Americans without passports are denied the right to exit the country legally. Malawians, even if they can afford the expense of having a passport, have to apply for special permission to leave.

It is my opinion that, by marriage, I should be entitled to a red passport for Japan as well. I am, to some extent, as personally invested in that country as the United States, equally concerned with the welfare of the population of the archipelago, speak the language and could see myself easily living there again at some point.

Yet, Japan and the US live in antiquated worlds where holding both passports is (on paper) an impossibility. Both countries maintain draconian monopolies on the state allegiance of their passport holders, forcing naturalized immigrants to forfeit citizenship to the country of their birth. Worse yet, the United States forces us to pay taxes to to her, even when we don’t live here and, ostensibly, receive no state benefits.

The Economist recently wrote on the issue of citizenship, stating succinctly:

Citizenship mattered in the days when defence relied on conscription. But modern warfare does not require armies of ill-trained conscripts. Few countries now rely on mandatory military service and those that do are mostly winding down the draft. Citizenship is no guarantee of loyalty: history’s worst traitors have been true-born citizens. Many of those ready to fight most enthusiastically for a flag will have gone through hell to get to their country.

Citizenship is a human rights issue. The implications of citizenship are directly addressed in the Universal Declaration of Human Rights, in Articles 2 and 13. In the United States, though, citizenship is used as a tool to marginalize an entire labor force, deny public services, insure less than optimal wages and allow employers to skirt basic workplace safety and compensation rules. It is interesting that the most fervent proponents of this antiquated system of resident registration, are the loudest advocates against “big government” and for “free markets.” Note Presidential candidate Ron Paul’s narrow and restrictive views of citizenship, which include denying citizenship to people whose only crime was to be born on US soil to parents who fought tooth and nail to get here. It is as if the market can only be free if its participants are determined and protected by the heavily funded and armed hand of the state.

Even worse, the United States is the greatest exporter of advanced degrees in world. We don’t allow Chinese graduate students, for example, to stay in the US upon graduation, despite the fact that the number of domestic PhD’s in the sciences is embarrassingly low. We bring them in, then kick them out as quickly as possible unless they are able to quickly find a private sponsor. God forbid that they might want to start their own operation in the US or work for some small business. So much for promoting entrepreneurship among the educated.

Obviously, some are able to skate this requirement of unipolar citizenship. Canadians and Israelis often hold passports from both countries. People from developing countries, and those who likely have sacrificed the most to attain US citizenship are barred from holding passports in their countries of birth. It is an incredible double standard. Ironically, Israel, which demands the right of dual citizenship with the United States, deny even full Israeli citizenship to the Palestinians.

In an increasingly intertwined and mobile global economy, the concept of the state and of citizenship/allegiance are quickly becoming an antiquated and outdated concept. More than 200 million people around the world live outside the countries of their birth. For me, travelling to another country is the same as travelling to, say, California, taking at least as much time and effort. I am equally employable or unemployable in Japan as I am in the United States. My services are valued as much in Europe and they would be in Africa or South East Asia, so when, I ask, are states going to finally recognize this reality and catch up? Even Reale in 1931, referred to the passport as “an anachronism in the modern world” and predicted that one day, it would become irrelevant.

1. Abolish passports – Publicly, states will imply that passports are meant to protect and secure borders to prevent incursion by those who pose a threat to the state. Clearly, this did not work on 9/11, nor does it work well anywhere else. The greatest threats to the security of any state probably already possess citizenship. Passports are useless guarantees of the stability of the state and merely serve to exclude economic undesirables. Best to rid ourselves of them entirely.

2. In the absence of abolishment, allow free and open passage worldwide – Proponents of citizenship posit that the “flood gates” will open, and developed states will face an unprecedented flow of immigrants from developed countries. The truth is, that those who wish to come to places like the United States, already do. In addition, most people would rather remain in their communities than travel to places where they know no one. The United States (and Europe) has a system of open borders, but people still choose to live in impoverished hell holes like Mississippi. Many other forces, besides passports, keep people at home.

Clearly, though, the first option is the most radical and the most difficult to implement. The abolishment of passports would mean the abolishment of that which defines the state. Simply, states, as we know them would cease to exist and would become, rather, provincial areas with open borders, but local laws and local systems of taxation. That is exactly what the United States is, though a passport-less world would lack the greater power of a centralized government, such as that of the US Federal Government.

The second option is the most reasonable and should be the goal of states in the 21st century. Without the free and unrestricted passage of all global citizens, the world will stagnate in a restricted and deprived global marketplace, much akin to the restrictive feudal states of pre-Enlightenment Europe. The second option is the best option for the development of global human rights, the free exchange of ideas and economic development. The rising BRIC economies will mean greater economic equality for all world citizens. The United States and Europe need not fear a mass influx of poor people seeking opportunities. They have more than a few options now.