A Short Literature Review on HIV in Mississippi 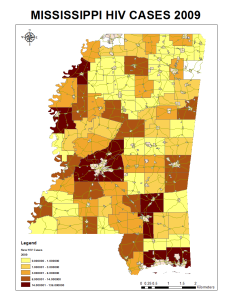 Despite making up only 37% of the state population, African Americans account for 78% of HIV cases[1]. HIV infections nationwide are increasing rapidly among African American women(find ref). In 2000, Rural Mississippi had the second  highest incidence of HIV of any region in the country, and heterosexual transmission of HIV was highest in Mississippi, compared with other states[2].  State policies such as abstinence only education, low access to health services and policies which prevent individuals from entering the system until they have full AIDS are exacerbating transmission[3]. HIV in Mississippi has long been shown to be disproportionately high in rural African-American compared with urban and rural whites[4]. Among HIV infected pregnant women, African-American women far outnumber women of other ethnicities, are less likely to present to clinics and more likely to have co-infections with other STIs[5].  Incarceration has been shown to be associated with HIV/Hep C co-infections[6].

Adherence to treatment regimens is affected by lifestyle factors such as drinking and drug use, individual symptoms of depression and social attitudes which stigmatize HIV infected individuals in rural Southern populations [7]. HIV transmission in rural areas of Mississippi has been shown to occur through heterosexual contact and partnerships largely occur between older men and very young women[8]. In urban areas, HIV transmission among MSM has been well documented. Increases in incidence rates of MSM in the urban South is higher than that of MSM in all other regions combined[9]. Like heterosexual partnerships among African-Americans in rural Mississippi that results in HIV transmission, age disparities among MSM pairings are highly associated with HIV transmission[10]. Rural African American male HIV cases were more likely to report being IDUs, were more likely to report concurrent sexual pairings and to report having exchanged sex for money than urban cases. Urban cases, however, were less likely to use condoms than rural HIV positive individuals. These results suggest vast differences in the nature of sexual pairings and thus opportunities for HIV transmission between urban and rural African American populations[11].

Mississippi has one of the highest incarceration rates in the country, and prison populations tend to be overwhelmingly African American and male[12]. Prisons and crime are known to be associated with HIV transmission[13].  Among formerly incarcerated HIV positive males residing in rural areas, those with larger number of past arrests are associated with more sexual pairings, are less likely to use condoms and more likely to buy or sell sex[14]. Risky sexual behavior among parolees has been shown other contexts to be common[15].

Migration which might affect spatial data quality appears to not coincident with HIV diagnosis. One study concluded that although IDUs were more likely than others to change location of residence following diagnosis of HIV, in general HIV transmission in new HIV cases in rural Mississippi and Alabama appears to be occurring locally[16].

6.            Burton MJ, Reilly KH, Penman A: Incarceration as a risk factor for hepatitis C virus (HCV) and human immunodeficiency virus (HIV) co-infection in Mississippi. Journal of health care for the poor and underserved 2010, 21:1194.