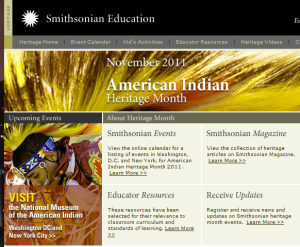 I was just reading a web page on Oyate, a Native American advocacy site devoted to promoting books which sincerely promote or reflect the words of Native peoples or which accurately depict Native history.

On it, Judy Dow and Beverly Slapin briefly attempt to deconstruct the myths of Thanksgiving, in order to right the wrong of revisionism and the white washing of America’s awful history of bloody colonization:

What is it about the story of “The First Thanksgiving” that makes it essential to be taught in virtually every grade from preschool through high school? What is it about the story that is so seductive? Why has it become an annual elementary school tradition to hold Thanksgiving pageants, with young children dressing up in paper-bag costumes and feather-duster headdresses and marching around the schoolyard? Why is it seen as necessary for fake “pilgrims” and fake “Indians” (portrayed by real children, many of whom are Indian) to sit down every year to a fake feast, acting out fake scenarios and reciting fake dialogue about friendship? And why do teachers all over the country continue (for the most part, unknowingly) to perpetuate this myth year after year after year?

Is it because as Americans we have a deep need to believe that the soil we live on and the country on which it is based was founded on integrity and cooperation? This belief would help contradict any feelings of guilt that could haunt us when we look at our role in more recent history in dealing with other indigenous peoples in other countries. If we dare to give up the “myth” we may have to take responsibility for our actions both concerning indigenous peoples of this land as well as those brought to this land in violation of everything that makes us human. The realization of these truths untold might crumble the foundation of what many believe is a true democracy. As good people, can we be strong enough to learn the truths of our collective past? Can we learn from our mistakes? This would be our hope.

We offer these myths and facts to assist students, parents and teachers in thinking critically about this holiday, and deconstructing what we have been taught about the history of this continent and the world.

While we are taught in school that the Pilgrims and the Native peoples (on whose land the Pilgrims invaded) sat down and had a happy meal together, the truth should be obvious. The only place one can obviously see Native folks in new England is at a casino in Connecticut.

A mere generation later, the balance of power had shifted so enormously and the theft of land by the European settlers had become so egregious that the Wampanoag were forced into battle. In 1637, English soldiers massacred some 700 Pequot men, women and children at Mystic Fort, burning many of them alive in their homes and shooting those who fled. The colony of Connecticut and Massachusetts Bay Colony observed a day of thanksgiving commemorating the massacre. By 1675, there were some 50,000 colonists in the place they had named “New England.” That year, Metacom, a son of Massasoit, one of the first whose generosity had saved the lives of the starving settlers, led a rebellion against them. By the end of the conflict known as “King Philip’s War,” most of the Indian peoples of the Northeast region had been either completely wiped out, sold into slavery, or had fled for safety into Canada. Shortly after Metacom’s death, Plimoth Colony declared a day of thanksgiving for the English victory over the Indians. (13)

I call to make Thanksgiving not a day of forgetting, but a day of remembering. I call to change the name of the holiday to “Indigenous People’s Day” and celebrate indigenous cultures all over the world.

The United States under little fanfare has named November 2011 National Native American Heritage Month to complement the opening of the fantastic Museum of the American Indian in Washington, D.C. If you ever have the opportunity to visit, please do. It is a museum about Native peoples, constructed by Native peoples and, ironically, is the closet structure to the Capitol building besides the Canadian Embassy. I have included a few pictures here of my last trip there.