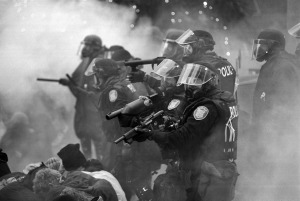 Right now, I’m thinking of the heavy handed response of municipal bodies to the present OWS protests and having a bit of nostalgia. Not of the good kind, however, but of the vast United States’ history of violently stifling public dissent when it gets too big to handle.

Granted, places like Oakland and NYC have very specific challenges to meet such as the protection of public safety and the insurance of public hygiene. I am positive that there are some very well-intentioned people in the Oakland and NY City Governments.

State violence to silence dissent, however, is a patent violation of what America is said to be. These basic principles of the protection of political speech, freedom of assembly, the protection of basic human rights and bans against state monopolies on violence are what made the United States a progressive nation in 1776.

Unfortunately, this has never stopped federal, state and local governments from violently quashing public movements to attain such frivolities and equal education for minorities, fair wages and the right to unionize, freedom from environmental degradation and threats to human health, the rights of indigenous peoples, the rights of immigrants to be free of exploitation, world freedom from the economic hegemony of the US through the WTO, and, most recently, domestic freedom from a self-interested economic system that rewards Wall Street elites at the expense of everyone else.

Last night, I watched “This is What Democracy Looks Like,” a collection of footage from the 1999 WTO Protests in Seatlle, which turned into something about more than just the WTO. I would recommend that city officials (and everyone else) watch this film, particularly those who malign the Occupy movements. Though the fallout from this massive event was short lived and largely forgotten, it’s clear that the entire scenario is being repeated all over the United States in 2011.