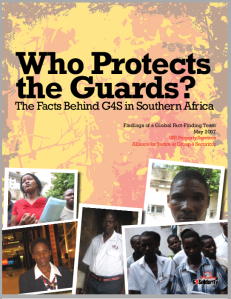 Report on G4S in Southern Africa. Click for the full report.

For all my colleagues that work in developing countries, here’s a scathing report on the situation of G4S Security staff who sit up all night outside your places of residence. Most work 84 hours a week for less than $20 a month and lack bargaining rights. There are even reports of physical abuse and guards going without food. Granted, this report is from 2007, but I’ve not seen evidence that working conditions have changed much since then, at least not in Malawi.

When I first went to Malawi, I didn’t know better. Honestly, the guards’ constant requests for money annoyed me. Taking a step back and considering the reprehensible conditions under which these men must work, and questioning whether these conditions would in any way be tolerated in the US, I can only come out against exploitative, first world companies like G4S. Apologistic arguments that all Malawians are treated this badly and thus nothing should be done are weak and unforgivable for those working in any humanitarian capacity.

Moral of the story: Tip your guards at least a months wage for every month you’re there. If one of them asks you for money, he might well need it because his meager wages aren’t sufficient to pay his kids’ school fees or, worse yet, buy food.

The nature of African inequality will not change overnight, but small actions can make a huge difference. Remember, one of those guys may take a blade for you one day.

The fact-finding team found serious and ongoing violations of labour laws concerning overtime and time off as well as behaviour that have consigned workers to a hand-to-mouth existence.

• “Kaffirs” and “Monkeys” Workers allege that G4S supervisors refer to guards
at the Johannesburg airport as “kaffirs” and “monkeys.” SATAWU, the union
representing guards at the airport, had to petition for their removal. The company took no corrective action of its own.

• “Whites Only” Toilets According to SATAWU, a G4S manager in Pretoria provides white guards with keys to the company toilet. Black guards are forced to use the toilet in a nearby mall.

• In Blantyre, Malawi, guards’ salaries are so low they are forced to live in some
of the area’s poorest housing—homes with no running water and no electricity. Guards said their families frequently don’t have enough to eat and their children’s school fees go unpaid. Tea, in a country where tea plantations dot the land, was considered by the wife of one G4S guard to be an unobtainable luxury item. Guards in Malawi could earn more because they work enormous
amounts of overtime. Instead of increasing their hourly pay for the four hours of overtime they typically work each day, Group 4 Securicor reduces their wages by half.

• In both Malawi and Mozambique, guards report they are not allowed to take paid leave. One guard from Blantyre, Malawi, reported that he had worked an entire year with only a single paid day off. He was allowed the day off to attend a funeral.