International Day of Non-Violence and Bike Polo in Bogota, Colombia 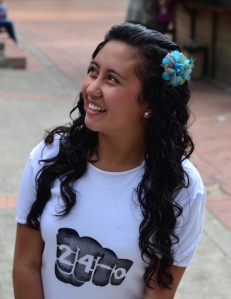 October 2nd is the International Day of Non-Violence in commemoration of Ghandi’s birthday. Unbeknownst to me, I spent the day in Bogota, Colombia, a city plagued with incredible history of murder, warfare and political violence. While Colombia has almost halved its murder rate since 2000 (the people have had enough), crime and homicide continue to be a problem.

This year, Colombian musician Cesar Lopez has begun a campaign calling for Bogotans to cease killing one another for 24 hours in the 24-0 campaign. Lopez, an anti-violence advocate, is the creator of the Escoptarra, a guitar made from a real AK-47. He tried to give one to the Dalai Lama, but was apparently refused. The Pope, apparently, accepted.

“24-0 is an initiative of musician Cesar Lopez, who on October 2 to commemorate the World Day of Non Violence, aims to achieve 24 hours with zero violent deaths in Colombia, “from October 1 to 12 m until October 2 to 12m, “men and women of all ages and places of Colombia should care for and respect life and that of others, to demonstrate that peace is also a decision and we as a society involves all “said Lopez. With this exercise, which is expected annually, the organizers aim which values ​​life and mencanismos seek to resolve differences peacefully. Thanks to the participation of the Mayor of Bogota and the Metropolitan Police, this year there will be a first driver in the capital but the call is to the whole country.”

I was in a Bogotan park and several young people in white “24-0” shirts appeared and began doing some sort of modern street theater. The text was in Spanish so it was mostly vague to me, but I was mostly able to get the general sense. During the worst times in Colombia’s troubled history, free thinkers and political critics were often the targets of violent retribution by the Colombian government, para-military groups and the drug gangs. Theater groups also fell victim to killings, beatings and violence. This group explained that they are celebrating the day by taking their message out publicly in the city of Bogota.

To celebrate the day, I watched a group of cyclists play bike polo on fixies (thanks to Bogota Bike Tours, more on them later). I was told that I just missed the blind soccer game, which apparently exists in Colombia (!). There was no violence among the members of the bike polo group, though they made for some great pictures particularly the lone female poloist. The guys were really serious about their game, but she was more serious about having a good time.