Food Week Post 2: How a Few Guys on Wall Street Control the Price of Food

Anyone who has been to a grocery store in the past 2 years can tell you that food prices have increased. Intuitively, one would think that a few key factors have contributed to this rise in food costs.

Rising fuel prices increase the price of delivery. Rising demand for food from an increasing world population, and demand for protein rich foods from a rapidly urbanizing world, specifically from the emerging economies of China, India and Brazil increase demand for grains. A turn toward using biofuels increases competition for grains that would normally go to feed humans and livestock. Climate change and extreme weather events create a volatile agricultural market.

However, despite all these very obvious players, the amount of volatility seen in the food commodity markets is unprecedented. Agricultural production, though regionally volatile, has not experienced the same level of fluctuation as that of prices in the food commodities markets. Energy demand and production, though increasing, also do not exhibit the same behavior. Conflicts have negatively affected market prices in certain commodities, most notably that of cocoa due to recent political conflict in the Ivory Coast, but, the large ag-producing countries of the United States, China, India and Brazil have experienced no such disruptions. In fact, China and Brazil, despite a growing population and experiencing an expansion of the middle class, are still largely able to maintain food security.

In short, demand is rising, though not volatile. Supply also, is rising, though not volatile. One can make the argument that volatility in the oil markets is spilling over into grain commodity markets, but biofuels still only account for a small percentage of energy use. These factors do little to explain the large fluctation of the of the food commodity markets that we are experiencing today.

According to a UN Conference on Trade and Development report

• “these factors (rising food demand, biofuels, climate change) alone are not sufficient to explain recent commodity price developments; another major factor is the financialization of commodity markets. Its importance has increased significantly since about 2004, as reflected in rising volumes of financial investments in commodity derivatives markets – both at exchanges and over the counter (OTC). This phenomenon is a serious concern, because the activities of financial participants tend to drive commodity prices away from levels justified by market fundamentals, with negative effects both on producers and consumers.”-UNCTAD, 2011 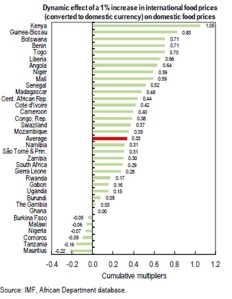 Effects of 1% Change in Worldwide Food Prices on Local Prices

Prior to the private equity bubble (remember the dot-com bubble?) of 2000, financial markets relied on investments into stock equities. Following the burst of what was up until then an unheard of rise in the financial markets, investors, speculators and hedge fund managers moved increasingly toward commodities investments outside of the traditional equity markets. Financial investors seeking new opportunities, moved toward to commodities markers, including oil and food, anticipating rising worldwide demand. Commodities of all kinds were financialized and brought into the portfolios of hedge funds and money markets.

I am not an economist. Through my limited understanding of futures markets, I think that what I understand is this: Prices of commodities are usually set on a supply and demand basis, with considerable elasticity. If one wants to buy gold, for example, demand and supply work to set prices. If one wants to take advantage of cheap gold now, all one has to do is buy and store to sell it later. The storage costs must be rolled into the final resale price. With oil and agriculture, the model is similar, but these commodities can only be stored temporarily, before they are unsalable (rot). Thus, as there is little to hedge against future risk, speculators will buy contracts for future, as yet unproduced, goods at set prices. This practice is not uncommon and was originally conceived to protect American and European farmers from risk and to insure consistent supply and price in the market.

What is different now is that interest prices are rolled in based on the length of contract, linking worldwide financial markets with the prices of commodities and distorting the true supply and demand relationship. As futures, by definition, are conceived to protect investors from risk, they are a perfect target for large hedge funds, which protect large investors from long term risk. The tying of interest rates into commodity prices means that end prices will fluctuate wildly with the market, while protecting investors from losing their shirts.

One important way that hedge funds minimize long term risk, is through machine trading. Computers and mathematical models available market information, predict future fluctuations and sell when necessary. What this does is insert an even greater level of volatility into the market. Sudden sales of commodity futures will induce other funds to sell as well, creating a herd effect of commodity sales that has little to do with true supply and demand models. Imagine how flocks of birds or schools of fish move in response to one change in direction by a member of the group and you can get an appreciation for how machine trading works.

We are already seeing the effects of the financialization of food commodities. There was an unprecedented rise in food prices during the period of 2000-2007. The financial crash of 2007, brought in part by the activities of the very same financial players that are driving food prices up, saw a drop in prices, but as the market rebounds, prices are increasing once again, now higher on average than they were in 2007. 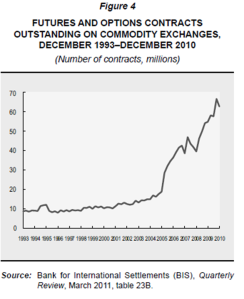 In fact, futures markets in commodities are exploding with the number of contracts rising to never before seen levels over the past decade as can be seen in the figure to the right.

Der Spiegel recently penned an excellent article on the rising price of food. In it, they spotlighted scumbag of the week, Alan Knuckman. Mr. Knuckman and a host of other US and worldwide speculators are unconcerned as long as the money is flowing to them. To Mr. Knuckman, he could be investing in GM, a new chain of box hardware stores, big pharma, copper, oil or food for kids, it’s all the same as long as it brings him a profit. In fact, he is quoted as saying, without a hint of irony, “the age of cheap food is over. Most Americans eat too much, anyway.” Yep, these dirtbags are just like the rest of America, blind to whatever happens outside their own gated communities.

Rising food prices are not a problem for Americans. In fact, we only use, on average, 13% of our income on food. In places like Kenya, however, food can consume nearly 100% of a household’s monthly income. In Kenya, food must be imported to account for shortages due to underdeveloped ag and transportation infrastructure, which prevents Kenyans from protecting themselves against extreme weather events and disruptions in supply. Even a 1% shift in the worldwide price of food can spell death for an Kenyan infant. What we have seen, however, is not a 1% shift, but rather a 71% increase in the worldwide price of grains since 2007. In Kenya, the price of corn meal has shot up 100% in the past five months. To Knuckman, this is just “an undesirable side effect of the market,” kind of like having to drink coffee that sat in the pot too long and turned bitter.