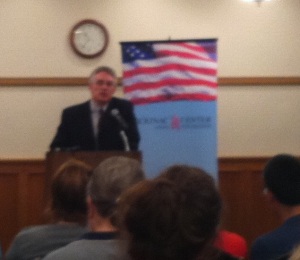 The Mackinac Center, a far right conservative group which operates on contributions from none other than the Koch Brothers, Exxon and a host of other big business, union busting, mega polluting oil and chemical giants, staged a press conference at the University of Michigan today to announce their involvement in the Graduate Student Employees organization’s (GEO) effort to unionize research assistants.

Presently, only graduate student instructors are allowed to participate in the union. This is the result of a 1981 ruling which determined that research assistants were not to be considered state employees, unlike student instructors who provided a necessary service for the University. At the time, there were only a handful of research assistants, and the feeling was that since these individuals were primarily invested in their own research and not the University, they did not deserve benefits.

Clearly, in 2011, the situation is vastly different. The U of M has transformed from a teaching institution, to a research juggernaut. Graduate student researchers provide a necessary service to the University and the State of Michigan as a whole.

I attended the Mackinac Center’s presentation today, led by Patrick Wright, senior legal analyst for the Mackinac Legal Center, flanked by University of Michigan Life Sciences Graduate student, Melinda Day. Wright repeatedly pointed to the 1981 ruling that research assistants are not to be considered state employees, and thus should not be allowed to unionize.

Melinda Day, sported her youth by spouting a litany of slippery slope arguments and unsupported speculations. She implied that her work week would be unnecessarily restricted by GEO to 20 hours a week. She also believed that the University would not be able to compete for quality graduate students, again due to GEO’s real or imagined work restrictions.

She also tried to claim that since federal funding has established rules for research assistants, union representation is not needed, though she failed to imply where graduate students should go when a true dispute arises. She made the claim that federal regulations already dictate pay and benefits for graduate students, failing to mention that federal regulations also restrict work weeks to 20 hours, though students regularly work longer on research projects. I don’t know how she rectifies this point with the previous point on GEO’s workweek restrictions.

In the end, she attempted to snidely portray GEO as merely money grubbing parasites, sucking off the hard earned money of the poor graduate students, while preventing them from getting their degrees. Without going through and more of the details, her impassioned, though halting speech was, in my opinion, a bunch of absolute nonsense.

Mostly, she looked as if she were about to cry. I kind of felt bad for her. It’s hard to be a fledgling rightist in a room full of angry (though quiet) lefties. Really, she needs a lot of help refining her schtick.

I was the only person to confront these people, which was absolutely disappointing. I think that grilling a political group after they have had time to make their points is absolutely necessary. I pointedly asked what stake the Mackinac Center had in this fight. Wright kept circling around to the same bullet points that he started with. After a few interruptions, he graciously made a statement that the Mackinac Center was against public employee labor unions, waved around some justifications, but again circled around what the Mackinac Center truly is: a group of rightist defenders of big business and wealthy property owners. I really just wish he would come out and said it.

I loathe this group. I really do. I think they are an anti-intellectual, anti-poor, pro money group which operates at the behest of those in our society which would tear down labor unions, public schools, public health care, welfare, environmental protections and host of other issues that are important to me. I’ve written about them before, in regards to an intimidation scheme they initiated against a University of Michigan faculty member.

Still, I made it a point to talk to Mr. Wright briefly and shake the man’s hand and tell him that I wasn’t a fan of his group, but I appreciated him answering my question.

It’s really difficult for me to sympathize with Melinda’s views (mostly spoonfed by the Mackinac Center) but, for the sake of civility, here they are anyway: