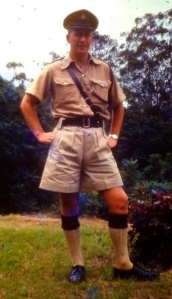 I woke this morning to find that a friend of mine, Harold Williams, passed away from leukemia last night. I had only known Harold for a few months, but communicated with him regularly through email. Through our entirely too brief series of exchanges, I developed incredible respect for what I considered to be a kindred spirit, one of only a few on this planet.

I first met Harold on my last trip to Malawi. I was shooting footage for a documentary project of mine on atheism in Malawi, as was referred to him as a member of the Malawi Association of Secular Humanists. In fact, he was the vice president of this very small but vocal group. I went to meet him at the Blantyre Sun Bird Hotel on a Monday afternoon. Not knowing what he looked like, I entered the courtyard looking for a Malawian. Instead, a middle aged white man called me over and introduced himself as Harold Williams.

Harold first went to Malawi in the 1950’s to work as a policeman for the Colonial government in Zomba. He instantly fell in love with the country (as everyone does). He met and married a Malawian woman, and signed on to stay after Malawi attained independence in 1963. I asked him why he stayed where many went back to England. He wished to help Malawi create a viable, independent government and help create a brighter future for this struggling country.

Harold eventually attained Malawian citizenship, raised children in Malawi, and created a life for himself in Malawi. He led a life very integrated with the people around him, spoke the language(s) fluently, and became one of Malawi’s most active and vocal advocates. Harold’s citizenship and dedication to Malawi called the very idea of what it is to be a “Malawian” into question, and larger ideas of “citizenship” that all states in the 21st century must face. Harold would enthusiastically discuss these broad but important questions in a manner usually reserved for sequestered academics.

Harold was deeply involved in the political life of Malawi. He participated actively in demonstrations, once even leading a protest against President Muluzi’s efforts to remain in office beyond the number of terms allotted to him in the Constitution, and found himself strong-armed by members of the Malawian military. Harold worked tirelessly for the right of free speech and protest in Malawi, which faces the same sorts of questions of protest and democracy that have recently been the focus of news reports on Egypt, Iran and Libya. Malawi’s small size and lack of resources keep it out of the world news, but its political concerns are really no different nor any less important than that of other, larger states.

Harold resisting arrest during a 2003 demonstration

Harold ran the Malawi Concern Blog, which publicly addressed the problems of the present administration under Bingu, found himself on a watch list of potential political enemies, and even had his blog blocked and suppressed recently. Harold was a vocal critic of Bingu’s Presidency, and regularly called him out on his habit of playing ethnic politics with Malawi, wide human rights abuses and his unapologetic flouting of Malawi’s secular Constitution.

Of course, Harold’s role as an advocate of secular humanism and secular government cannot be forgotten. Harold was an avowed secularist, and perceived fanatical religious belief to be a threat to the peace and welfare of Malawi. Particularly, he fought alongside other Malawi secular humanists to provide advocacy for persons accused of witchcraft related crimes and the economy surrounding it, battled the inclusion of Christianity into government policy, and publicly resisted the widespread and dangerous phenomena of religious opportunists in Malawi. Among other activities, Harold ran the official blog for the group.

Harold was a great guy. If I end up being half the person that Harold was by the time I am his age, I will consider this a life worth having lived. In writing this short, pseudo-obit, I feel as though I am leaving much out, but I think this speaks loads to what kind of person Harold was as a political activist, a human rights advocate and as a human being.

I miss Harold and am so very sorry that I will never have the opportunity to meet him again.