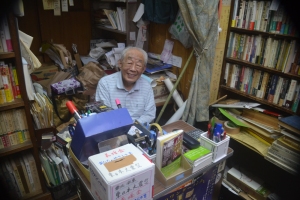 I’m slowly sifting through the 10,000 plus photographs that I took in my recent trip to Japan and was fortunate enough to find the photo to the left.

This is Kenichi Sakamoto, an 87 year old bookseller in the now fashionable Nakazaki-cho section of Northern Osaka.

I passed by the bookstore, “Aozora Shobo (青空書房）” (“Blue Sky Books”) on my way to meet a friend. It looked welcoming enough and I decided to kill some time inside. Mr. Sakamoto struck up a conversation, asking me where I was from, why I was in Japan, etc. so I drilled him with questions of my own. It turns out Mr. Sakamoto opened the store in 1947 and has been running it ever since. Amazingly, he is celebrating his 65th year in business. 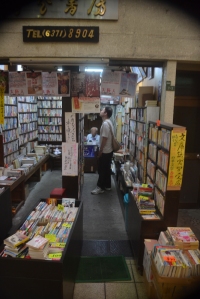 Sakamoto originally wanted to be a painter, but poverty forced him to start selling off his books to support his impoverished family after the war. After buying and selling books for some time, he opened his tiny store in a shopping area of Nakazaki-cho. Reflecting his artistic past and humble beginnings, Sakamoto stocks all kinds of book on art from all over the world, along with low-priced literary paperbacks.

I found out that Sakamoto is originally from Miyagi Prefecture, one of the areas hardest hit by the recent earthquake. A donation box for earthquake victims can be seen on the left side of his desk.

He wasted no time in expressing his sympathies for all affected and leveled his own harsh criticisms of the government’s slow response. He said he hoped that young people make the effort to be mindful when choosing their leaders, but that hope for Japan’s future rests on the proactive efforts on individuals. He believes that Japan’s people shouldn’t wait for the government to take care of things, but rather should do as he did and make use of whatever opportunities are in front of them.

Collection of Essays on Aozora Books

Bookstores in Japan range from massive chains to these incredible used stores which stock their shelves with care. I’ve included some pictures of a few below. Sakamoto’s store was particularly friendly and inviting.

I discovered while walking away from the store that someone published a collection of essays written by Aozora Shobo customers. Not many bookstores can claim such an incredible distinction.

Collection of Essays on Aozora Books