According to the Asahi Shinbun, as of today, there are ‎6,911 confirmed dead and 10,316 reported missing from the recent earthquake and subsequent tidal wave. The missing and the dead are from 11 prefectures and the city of Tokyo. All affected are in the northeast of Japan, primarily concentrated around Fukushima, Iwate and Miyagi prefectures.

Number of missing are not proportional to those confirmed dead. Fukushima has almost 6 times as many missing as confirmed dead, and Iwate has more than twice as many. The stress and sadness that relatives and friends of those missing must be overwhelming, and will be for decades to come. 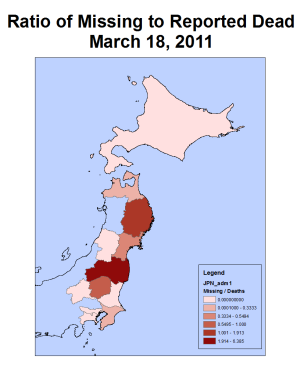