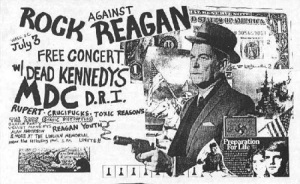 The other day, Reagan turned 100 years old, assuming that he’s still alive today. In fact, given the man’s incapacitated state at the end of his presidency, we would have to ask whether there is much difference between his physically dead state and the fictional being that conservative America created both then and now. Neither exist.

I hated Reagan when he came into office. I liked Carter and still do. Granted, I was 10. However, his greasy looks and the mantras of “strong on defense” were unsettling to me. In that time, it was almost unthinkable to argue with anybody that the words “strong on defense” were somehow flawed, despite having just gotten over the swill and suffering of Vietnam. Here was Reagan, vowing to do it all over again. White teachers at my school and white parents (including my own) all repeated the words “strong on defense” like mindless robots as if to say that the only respectable quality in a politician was his capacity to promote and implement violence. I was unaware of the basics of politics, but I could at least figure that out.

Hardly a fiscal conservative, Reagan went on a vast spending spree that left the country deeply in debt at the end of his Presidency. This is justified in the bizarre, fantasy laden mind of the right wing as having outspent the Soviets, who consequently collapsed, despite a vastly crumbing economy that preceded Reagan. Those of us in reality know full well that the true aim was to line the pocketbooks of defense contractors with easily spent tax payer money, to spread and extend the hegemony of the American empire and to solidify support amongst a section of the electorate who consider military spending to be a religious prerogative.

We also now know of how he and his conservative ilk conspired to keep the hostages in Iran so that he could win the 1980 election. We are also well aware of his other vast dealings with our supposed enemies in Iran. Those of us who were alive at the time remember his support of racist policy which sought to undo the gains of the civil rights movement. We remember his role in implementing a “war on drugs” that was fought by allowing more drugs on the streets. We remember how he ushered in a crisis of crime by creating conditions for drugs and violence by the dismantling of social policy which benefited the poor. We remember how he and his cronies re marginalized America by creating the conditions for inequality that persist to this day.

What an asshole. If I weren’t over 40 and Reagan weren’t long out of office and dead, I’d form a hardcore band.