Let this year see no war, no killing and a year that people learn to understand one another. Let the world be much more like our respective circles of accepting friends.

Already though, it looks as if the Ivory Coast will be plunged into an official Civil War barring any miracles from the Gbagbo camp.

2000-2010 continued a pattern of mass civilian death, destruction and instability of the 2oth century, and shows no signs of abatement. Meanwhile, the number of states that possess or are seeking nuclear weapons increases, virtually assuring the end of humanity on earth. Not a single nuclear state abandoned nuclear arms in the first decade of the 21st century, nor have their been any exemplary states in the pursuit of peace. Even a bastion of non-aggression like Japan showed signs of caving to the temptations of an expanded military and shows of strength by calling Article 9 into question back in 2005.

The American Empire further expanded in 2000-2010, with the occupations of Iraq and Afghanistan, and a host of new military installations worldwide. Never, in the history of the world has there been a military presence of a single state so geographically far-reaching. Meanwhile, an economically expanding China stands at a cross-roads of forced expansion or regional peace, raising specters of WWII with a recent row with Japan, over a small set of islands off the coast of Taiwan.

American government and business continues to export it’s problems elsewhere, allowing it’s citizens to live in an artificial peace akin to the idyllic beaches of Israel, or the walled, privately protected compounds of privileged South Africans. In 2010 America, it’s hard to even imagine that we are fighting two major wars, and standing on the precipice of several others. Granted, economic problems throughout the first decade rocked even the average citizen, but there is little awareness of the larger context of these shocks and even less political will to right the wrongs of a dangerously fractured American government. 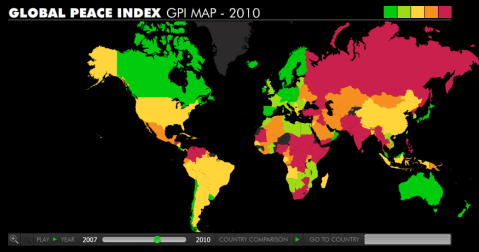 One response to “Happy New Year”